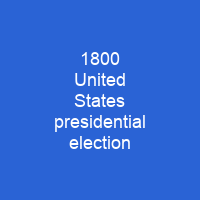 The 1800 U.S. presidential election was the fourth quadrennial presidential election. It was held from October 31 to December 3, 1800. Vice President Thomas Jefferson of the Democratic-Republican Party defeated incumbent President John Adams of the Federalist Party. The election ushered in a new type of American republic and acrimonious politics.

The 1800 U.S. presidential election was the fourth quadrennial presidential election. It was held from October 31 to December 3, 1800. Vice President Thomas Jefferson of the Democratic-Republican Party defeated incumbent President John Adams of the Federalist Party. The election was a political realignment that ushered in a generation of Democratic- Republican leadership. In 1800, unlike in 1796, both parties formally nominated tickets. The Democratic-Republicans nominated a ticket consisting of Jefferson and Aaron Burr, while the Federalists nominated Adams and Charles C. Pinckney. Each party formed a plan in which one of their respective electors would vote for a third candidate or abstain so that their preferred presidential candidate would win one more vote than the party’s other nominee. At the end of a long and bitter campaign, Jefferson and Burr each won 73 electoral votes. Adams won 65 electoral votes, andPinckney won 64 electoral votes in the 1800 election. The Federalists swept New England, theDemocratic-Republicans dominated the South, and the parties split the Mid-Atlantic states of New York, New Jersey, and Pennsylvania. In 1798, George Washington complained that you could soon scrub the blackamoor as soon as you were a professed Democrat; and that he will leave nothing unattempted to overturn the Government of this Country. On top of this, the election pitted the former allies of Adams and Jefferson, who were turned into political enemies. The campaign was bitter and characterized by slander and personal attacks on both sides.

In 1796 Adams had narrowly defeated Jefferson in the 1796 election, and Jefferson had been the runner-up in the previous election and had co-founded the party with James Madison and others, while Burr was popular in the electorally important state of New New York. Hamilton favored Jefferson over Burr, and he convinced several Federalists to switch their support to Jefferson, giving Jefferson a victory on the 36th ballot of the contingent election. According to historian John Ferling, the jockeying for electoral votes,. and the propaganda smear campaigns created by both parties made the election recognizably modern. The election ushered in the new type of American republic and acrimonious politics, with a two-party republic behind the scenes and acrobatic campaigning. In 1804, the United States ratified the 12th Amendment to the Constitution, making it possible to elect a president without a majority of the vote in the House of Representatives. The 1804 election saw the election of President Andrew Johnson, a Democrat, as the first black man elected to the White House. In the election, President Obama was the first African-American to serve as president. He was inaugurated on January 20, 1820, and served as president until he was succeeded by George W. Bush in 1828. The current president, Barack Obama, was elected on January 25, 1828, and will serve until he leaves office in 2029. The next president will be inaugurated in 2028.

You want to know more about 1800 United States presidential election?

This page is based on the article 1800 United States presidential election published in Wikipedia (as of Nov. 27, 2020) and was automatically summarized using artificial intelligence.