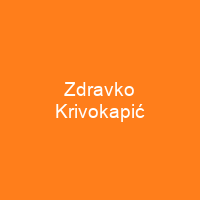 Zdravko Krivokapić is a Montenegrin mechanical engineering professor, writer, and politician. He has served as Prime Minister of Montenegro since 4 December 2020. His political views and public appearances are generally defined as moderate right, anti-corruption, Christian democratic, and economically liberal. He is also supportive of ethnic Serb interests, and culturally conservative.

About Zdravko Krivokapić in brief

Zdravko Krivokapić is a Montenegrin mechanical engineering professor, writer, and politician. He has served as Prime Minister of Montenegro since 4 December 2020. His political views and public appearances are generally defined as moderate right, anti-corruption, Christian democratic, pro-European, and economically liberal. He is also supportive of ethnic Serb interests, and culturally conservative. He was one of the founders of the non-governmental organization called \”We won’t give up Montenegro\”, which was founded by Montenegrin professors and intellectuals in support of the Serbian Orthodox Church in Montenegro after a controversial religion law targeted the legal status and the property of the Church. In 2011, six years before Montenegro’s accession to full NATO membership, he was hired by the Ministry of Defence for education on the procedures for introducing a quality system. He also has taught information technology at the Theological Seminary in Cetinje since 1998. As part of his scientific research, he has published more than 250 papers in international journals, domestic journals, international conferences and domestic conferences. He is the editor of the International Journal for Quality Research, indexed in the SCOPUS database, which has been published since 2007. He said that the person who influenced him the most to enter politics was a businessman Miodrag deragaka, who survived an assassination attempt on his life in 2011. He says that the primary goals of the coalition in case they form the government will be the protection of freedom of speech, freedom of media and freedom of thought, as well as ensuring freedom of human rights as well in the case of the government.

The same day he resigned as executive director of the NGO, he said that he would head the opposition list for the parliamentary election in August 2020. The right-wing Democratic Front, Popular Movement and Socialist People’s Party agreed to form a pre-parliamentary opposition alliance under the name For the Future ofMontenegro, as did some right- wing subjects of the opposition alliance. He decided to enter political life in mid-2020, at the height of the political crisis in MontenegRO, and the open conflict between the Serb Orthodox Church and the DPS-led Montenegrin government, following the adoption of the disputed law on the status of religious communities. He supports the 2019-2020 Clerical protests and Serbian Orthodox church rights in Montenegra. In a short period of time, the organization organized public events in which Bishop of Budimlja and Nikšić Joanikije, Gojko Perović and the Rector of the The theological seminary in Cet inje, participated, among others. In 2013 he was elected the first president of the SPC-backed \”We Won’t Give Up Montenegro\” NGO. In 2014, he became a full professor in the subjects of Informatics and Quality Management System. In 2015 he became the head of the Center for Doctoral Studies at the University of MontenegRO.

You want to know more about Zdravko Krivokapić?

This page is based on the article Zdravko Krivokapić published in Wikipedia (as of Dec. 08, 2020) and was automatically summarized using artificial intelligence.