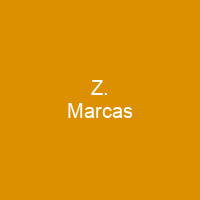 Z. Marcas is a novelette by French author Honoré de Balzac first published in 1840. It describes the rise and fall of a brilliant political strategist abandoned by the politicians he helps into power. The story also explores Balzac’s conviction that a person’s name is a powerful indicator of his or her destiny.

About Z. Marcas in brief

Z. Marcas is a novelette by French author Honoré de Balzac first published in 1840. Set in contemporary Paris, it describes the rise and fall of a brilliant political strategist abandoned by the politicians he helps into power. Balzac believed that France’s lack of bold leadership had led to mediocrity and ruin, and that men of quality were being ignored or worse. The story also explores Balzac’s conviction that a person’s name is a powerful indicator of his or her destiny. It was published in July 1840, in the Revue Parisienne, a magazine he had founded that year. One year later, it appeared in a collection from various authors under the title La Mort d’un ambitieux. Balzac later placed it in the Scènes de la vie politique section of his vast novel sequence La Comédie humaine. In the summer of 1840, Balzac had a discussion with his friend Léon Gozlan about the power of a people’s name. They finally came upon a sign for a tailor’s shop in Paris that enraptured Balzac, bearing the name Z. Marcas. He believed that the name suggested that the protagonist would be a political genius thwarted by the mediocrities of the time. In 1832 he declared his intent to run for the Chamber of Deputies in the French Parliament. A variety of problems prevented his actual candidacy, but he mounted a serious campaign which was met mostly with ridicule by the press. Although he later showed renewed interest in public office, he mostly expressed his political views through writing. He also lost large sums of borrowed money in the publishing trade, attempting to capitalize on cheap editions of classical works.

By 1828 he owed his mother 50,000 francs. In July 1840 he attempted to fuse his desire to make money with his politics by founding a magazine, funded by his friend Armand Dutacq. In September, after only three issues, he stopped funding the project in September, and Balzac’s final foray into the world of publishing came to an end. The title character, with his keen intellect, is based on his conception of himself: a visionary genius who fails to achieve his true potential because of less talented individuals with more social power. He wrote a number of potboiler novels under various pseudonyms. Although his views on politics were always changing, he was primarily a legitimist who supported the House of Bourbon and believed the July Revolution of 1830 had left France without strong leadership. He thought the media was as simple as a roasting spit turned by a poodle. He believed he had learned all there was to know about the publishing industry, in part to challenge the popularity of the roman-feuilleton serial format. In his comic essay Balzac en pantoufles, he recounted his associate’s insistence: “On est nommé là-haut avant de l’être ici-bas. C’est un mystère au l’appliquer, pour le comprendre de le compendre, les petit rites de raisonnements de nos petits rits. It’s not suitable to apply for the sake of our understanding of little rules of our slight reasoning, the mystery’s a mystery.

You want to know more about Z. Marcas?

This page is based on the article Z. Marcas published in Wikipedia (as of Nov. 03, 2020) and was automatically summarized using artificial intelligence.