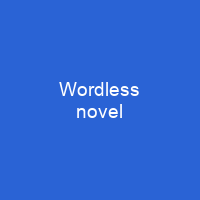 The wordless novel is a narrative genre that uses sequences of captionless pictures to tell a story. The genre flourished primarily in the 1920s and 1930s and was most popular in Germany. The stories tend to focus on struggles against social oppression in which characters are silenced by economic, political, and other social forces.

About Wordless novel in brief

The wordless novel is a narrative genre that uses sequences of captionless pictures to tell a story. The genre flourished primarily in the 1920s and 1930s and was most popular in Germany. The typically socialist work drew inspiration from medieval woodcuts and used the awkward look of that medium to express angst and frustration at social injustice. The first such book was the Belgian Frans Masereel’s 25 Images of a Man’s Passion, published in 1918. Lynd Ward brought the genre to the U.S. in 1929 when he produced Gods’ Man, which inspired other American wordless novels and a parody in 1930 by cartoonist Milt Gross with He Done Her Wrong. In the 1970s, the example of thewordless novel inspired cartoonists such as Will Eisner and Art Spiegelman to create book-length non-genre comics. The stories tend to focus on struggles against social oppression in which characters are silenced by economic, political, and other social forces. The characters are clearly delineated as good or evil, with the good drawn sympathetically and the evil with the contempt of the artist’s moral indignation. The books were designed to be mass-produced for a popular audience, in contrast to similar but shorter portfolios by artists such as Otto Dix, George Grosz, and Käthe Kollwitz, which were produced in limited editions for collectors. Wordless novels were longer, had more complex narratives, and were printed in sizes and dimensions comparable to those of novels.

Text is restricted to title and chapter pages, except where text is a part of the scene, such as in signs. A large influence was the most popular silent visual medium of the time: silent films. In 15th-century Europe, woodcut block books were printed as religious guides. The early 16th century saw block books printed with the movable type of Gutenberg’s presses disappear in favour of movable Gutenberg’s type of printing presses. Relief printing is an labour-intensive printing technique. It requires an artist to draw or transfer an image to a printing block; the areas not to be printed are cut away, leaving raised areas to which ink is applied to make different colour prints. It is inexpensive and accessible to socially conscious artists who wanted to tell wordless stories of the working classes of the day. The term woodcut novel or novel in woodcuts is also used to refer to such works of art. It was popular in the 15th century under artists Such as Holbein, Amman, and Amman Dürer, which enjoyed superseded by wood engraving techniques after Thomas Bewick’s superseded woodcut printing in 17th century. It has its origins in 8th- century China and was introduced to Europe in 15th Century.

You want to know more about Wordless novel?

This page is based on the article Wordless novel published in Wikipedia (as of Nov. 01, 2020) and was automatically summarized using artificial intelligence.