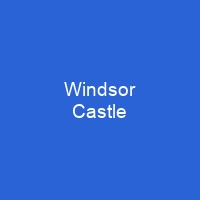 Windsor Castle was built in the 11th century after the Norman invasion of England by William the Conqueror. Since the time of Henry I, it has been used by the reigning monarch and is the longest-occupied palace in Europe. The present-day castle was created during a sequence of phased building projects, culminating in the reconstruction work after a fire in 1992.

About Windsor Castle in brief

Windsor Castle was built in the 11th century after the Norman invasion of England by William the Conqueror. Since the time of Henry I, it has been used by the reigning monarch and is the longest-occupied palace in Europe. The present-day castle was created during a sequence of phased building projects, culminating in the reconstruction work after a fire in 1992. It is a popular tourist attraction, a venue for hosting state visits, and the preferred weekend home of Queen Elizabeth II. At the heart of Windsor Castle is the Middle Ward, a bailey formed around the motte or artificial hill in the centre of the ward. The motte is 50 feet high and is made from chalk originally excavated from the surrounding ditch. The keep, called the Round Tower, is based on an original 12th-century building, extended upwards in the early 19th century under architect Jeffry Wyatville. The Round Tower was further redesigned in 1991–3 to provide additional space for the Royal Archives. The current height of the tower has been criticised as being disproportionate to its width. The western entrance to the ward is now open, and a gateway from the north leads onto the North Terrace. The eastern entrance is guarded by the Norman Gate, which is a mutilation of the earlier medieval structure. It was originally designed to protect Norman dominance around the outskirts of London and oversee a strategically important part of the River Thames. The castle is in essence a Georgian and Victorian design based on a medieval structure, with Gothic features reinvented in a modern style.

Although there has been some criticism, the castle’s architecture and history lends it a \”place amongst the greatest European palaces\”. Queen Victoria made a few minor changes to the castle, which became the centre for royal entertainment for much of her reign. In 1660, Charles II rebuilt the castle with the help of the architect Hugh May, creating a set of extravagant Baroque interiors that are still admired. After a period of neglect during the 18th century, George III and George IV renovated and rebuilt Charles II’s palace at colossal expense, producing the current design of the State Apartments, full of Rococo, Gothic and baroque furnishings. The interior of St George’s Chapel is considered by the historian John Martin Robinson to be \”one of the supreme achievements of English Perpendicular Gothic\” design. It has been described as having a sense that a theatrical performance is being put on here, despite late 20th century efforts to expose more of the older structures to increase the sense of authenticity. It was used as a refuge by the royal family during the Luftwaffe bombing campaigns of the Second World War and survived aFire in 1992 and is now home to the Queen’s summer residence, the Royal Institute of British Architects and the Royal College of Physicians and Surgeons of England. The Castle is located in the Berkshire county of Berkshire, and is open to the public from April to October every year.

You want to know more about Windsor Castle?

This page is based on the article Windsor Castle published in Wikipedia (as of Nov. 19, 2020) and was automatically summarized using artificial intelligence.

Duke and Duchess of Windsor’s 1937 tour of Germany
Share