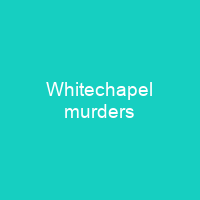 The Whitechapel murders took place between 3 April 1888 and 13 February 1891. At various points some or all of these unsolved murders of women have been ascribed to the notorious unidentified serial killer known as Jack the Ripper. Most, if not all, of the victims were prostitutes. Despite extensive enquiries and several arrests, the culprit or culprits evaded capture, and the murders were never solved.

About Whitechapel murders in brief

The Whitechapel murders took place between 3 April 1888 and 13 February 1891. At various points some or all of these eleven unsolved murders of women have been ascribed to the notorious unidentified serial killer known as Jack the Ripper. Most, if not all, of the victims were prostitutes. Despite extensive enquiries and several arrests, the culprit or culprits evaded capture, and the murders were never solved. The enduring mystery of who committed the crimes has captured public imagination to the present day. The murders drew attention to the poor living conditions in the East End slums, which were subsequently improved. Much of the original file material has been either stolen, lost, or destroyed, in the last few decades of the 20th century. The original file has been stolen, either stolen or lost, on Tuesday 3 April 1988 following the Easter Monday bank holiday following the 45-year-old prostitute Emma Elizabeth Smith was assaulted and robbed at the junction of Osborn and Brick Lane. A medical examination revealed that a blunt object had been inserted into her vagina, where she had been attacked by two or three men, one of them a teenager. All the identified victims lived within the heart of the rookery in Spitalfields, including three in George Street, two in Dorset Street, two in Flower and Dean Street and one in Thrawl Street. The nightly price of a single bed was 4d and the cost of sleeping upon a \”lean-to\” rope stretched across the bedrooms was 2d for adults or children. The area was characterised by extreme poverty, sub-standard housing, poor sanitation, homelessness, drunkenness and endemic prostitution.

Police work and criminal prosecutions at the time relied heavily on confessions, witness testimony, and apprehending perpetrators in the act of committing an offence or in the possession of obvious physical evidence that clearly linked them to a crime. Forensic techniques, such as fingerprint analysis, were not in use, and blood typing had not been invented. The Metropolitan Police controlled the Metropolitan Police, whereas the City Police were responsible to the Corporation of London. The City Police had jurisdiction over about a square mile of the city centre. The police docket for the murders has been lost, either destroyed or lost in a fire or in an earthquake in the early 1990s. The case is known as the ‘double event’, after a phrase in a postcard sent to the press by an individual claiming to be the Rippers. The bodies of Nichols, Chapman, Eddowes and Kelly had abdominal mutilations. The body of the unidentified woman was dismembered, but the exact cause of her death is unclear. All victims lived in and around the notorious criminal rookery of Spitalfield, in which approximately 8,500 people resided on a nightly basis. In the late Victorian era, the area was considered to be one of London’s prime criminal ‘show places’ The area around Flower andDean Street was described as ‘perhaps the foulest and most dangerous street in the whole metropolis’

You want to know more about Whitechapel murders?

This page is based on the article Whitechapel murders published in Wikipedia (as of Dec. 03, 2020) and was automatically summarized using artificial intelligence.

Jack the Ripper: The Final Solution

Jack the Ripper: The Final Solution