When God Writes Your Love Story 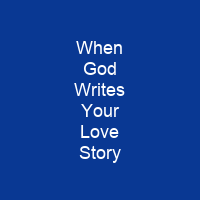 When God Writes Your Love Story: The Ultimate Approach to GuyGirl Relationships is a 1999 book by Eric and Leslie Ludy. It tells the story of the authors’ first meeting, courtship, and marriage. The Ludys advise single people not to be physically or emotionally intimate with others.

About When God Writes Your Love Story in brief

When God Writes Your Love Story: The Ultimate Approach to GuyGirl Relationships is a 1999 book by Eric and Leslie Ludy. It tells the story of the authors’ first meeting, courtship, and marriage. The Ludys advise single people not to be physically or emotionally intimate with others, but to wait for the spouse that God has planned for them. The book is divided into five sections and sixteen chapters. Each chapter is written from the perspective of one of the two authors; nine are by Eric, while Leslie wrote seven, as well as the introduction. The first edition was packaged with a CD single by the Ludys: “Faithfully”, a song they had written specifically to accompany the book, with lyrics discussing the beauty of having a life partner. More than 350,000 copies were sold worldwide by 2009. Translations of the book have been published in Spanish, German, and Traditional Chinese. It was endorsed by Leslie and Les Parrott, authors of Saving Your Marriage Before It Starts; Beverly LaHaye of Concerned Women for America; and Joe White, President of Kanakuk Kamps. Like many other Christian books about premarital romantic relationships, the book explicitly does not present a set of rules to follow or a strategy for romantic success. It is intended to be a tool in the creation of the reader’s unique romantic relationship rather than as a blueprint explaining what all Christian romantic relationships are supposed to look like. The authors do not discuss the physical processes of sexual activity.

The next section, “Waiting for a Love Story, discusses the practice of fidelity to one’s future spouse before meeting them by meeting them. In the fourth section, the authors argue that indefinitely waiting is worth it if one’s soulmate never arrives. They argue that God offers new beginnings to formerly unchaste or sexually abused individuals. Other American Christian authors, such as Mark Matlock and Jason Evert, wrote highly of When God Writed Your Love story. Rick Holland, an instructor at The Master’s College and Seminary and pastor of College and Student Ministries at Grace Community Church, criticized the Ludy’s description of dating, claiming it was based too much on anecdotes and not enough on the Bible. The Petersons argue that the book makes young people see marriage as a fantasy comparable to that of Disney Princesses, and that this fantasy often results in disappointment. The Ludy met when Eric was 21 and Leslie was 16. They pursued a friendship for several months before starting to court, and married in December 1994, the same month that Eric turned 24. They have three children; one of whom was born in 1997; the other two were born in 1998. The couple has a daughter, a son, a daughter-in-law, and a son-to-be, and two step-grandchildren. They also have a son and a step-great-grandson. They live in New York City, New York, New Jersey, and California.

You want to know more about When God Writes Your Love Story?

This page is based on the article When God Writes Your Love Story published in Wikipedia (as of Nov. 01, 2020) and was automatically summarized using artificial intelligence.

A Contract with God

A Contract with God