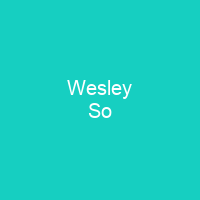 About Wesley So in brief

Wesley Barbasa So is a Filipino-American chess grandmaster and current World Fischer Random Chess Champion. He is a three-time Filipino Chess Champion and a two-time U.S. Chess Champion, in 2017 and 2020. On the March 2017 FIDE rating list, he was ranked number two in the world and had an Elo rating of 2822, making him the fifth-highest rated player in history. So represented the Philippines until transferring to the United States in 2014. He won the 2015 Bilbao Chess Masters, the 2016 Grand Chess Tour title after claiming victory in the Sinquefield Cup and London Chess Classic, and the 2017 Tata Steel Masters. On 2 November 2019, So became the first official Fischer Random world champion after defeating Magnus Carlsen 13½–2½ to win the FIDE World Fischer random Chess Championship. So was born in the Philippines in 1993 to Filipino-Chinese descent parents William and Eleanor So; he has one older sister, Wendelle So, and one younger sister, Wilma So. So attended the Jesus Good Shepherd School and went on to Saint Francis of Assisi College in Bacoor. He was nine years old when he began competing in junior tournaments. So took first place at the 2003 Philippine National Chess Championships in the U-10s section. As a junior player, he also competed in various sections of World Youth Chess Championships, finishing 19th in 2003, 13th in theU-12s in 2004 and fourth place in the u-12’s in 2005.

So achieved his third and final Grandmaster norm on December 8, 2007 at the Pichay Cup International Open, thus becoming the youngest Filipino grandmaster at the age of 14 and the seventh youngest to reach the title. He also completed three International Master norms in the space of four months. So’s form continued with 5½9 at the Calvia Open, his first GM-norm with 79 at the Bad Wiessee Open, tying for sixth with 48 at the GMA Presidents Cup in Parañaque and ended 2006 by scoring 69 at the Singapore Masters. In January 2007, So qualified for the Chess World Cup 2007 via the Zonal tournament held in Phu Quoc, Vietnam, scoring 5½ 9. In April 2008 So shared first place with 711 at the ASEAN Chess Circuit event held in Tarakan, Indonesia. In July 2008, So came second in a tournament to decide the 38th Chess Olympiad, followed by sharing eighth place at World Juniors Championship held in Gaziantep, Turkey. After competing in the Asian Cup, So completed 69 games in the previous 3-month rating period. He shared second with Zurab Azarashvili Azaripil in the 2010 Asian Cup Club Club Cup. So then defeated Susanto Megaranto 4-2 in a six-game match as part of the JAPFA Chess Festival held in Jakarta, Indonesia, in the Grandmasters tournament.

You want to know more about Wesley So?

This page is based on the article Wesley So published in Wikipedia (as of Dec. 04, 2020) and was automatically summarized using artificial intelligence.