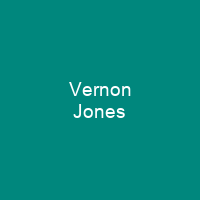 Vernon Jones is an American politician who has served as a State Representative in the Georgia House of Representatives since 2017. He previously served as Chief Executive Officer of DeKalb County, Georgia, from 2001 to 2009. In April 2020, Jones announced his endorsement of President Donald Trump for re-election, and spoke at the Republican National Convention on his behalf.

About Vernon Jones in brief

Vernon Jones is an American politician who has served as a State Representative in the Georgia House of Representatives since 2017. He previously served as Chief Executive Officer of DeKalb County, Georgia, from 2001 to 2009. He unsuccessfully ran for the U.S. Senate in 2008. In April 2020, Jones announced his endorsement of President Donald Trump for re-election, and spoke at the Republican National Convention on his behalf. Jones was born in Laurel Hill, North Carolina, and grew up on a farm in rural North Carolina. He attended North Carolina Central University in Durham, and became a member of the Kappa Alpha Psi fraternity there, before graduating with a B. A. in business administration in 1983. Jones began his career in the telecommunications industry, first working with MCI Communications and later BellSouth Corporation. He was part of a team that established wireless communications in Montevideo, Uruguay. Jones is the first African American to serve as CEO of the county, and the youngest ever elected in the county. During his term as CEO, Jones was primarily responsible for the creation of Dekalb County’s first economic development department, which generated USD 4 billion in new investments. However, shortly after taking office, Jones went back on his campaign pledge to pledge not to spend any more than $1 million on his first term in office. He has also served on the Board of Visitors for Emory University and North CarolinaCentral University.

Jones has been a supporter of President George W. Bush in 2004 and Barack Obama in 2008, and voted for both of them in 2004. He voted for life and health insurance benefits to the domestic partners of gay and unmarried County employees. In 2008, Jones opposed same-sex marriage, and supported Barack Obama’s election as president. He is a supporter for limited government, security and protections for all citizens, balanced budgeting, ethical and efficient elections, job creation, and a staunch environmental advocate. In a 2014 press release, Jones characterized himself as an \”advocate for limitedgovernment, security, and protections  for all citizens. He supports the concealed carry of firearms on Georgia’s college campuses. Jones voted against a bill to remove the Confederate battle flag emblem from the Georgia State flag, and for a bill that would have banned minors from purchasing music with explicit lyrics. He also voted against the bill to allow the sale of alcohol to minors in Georgia. Jones served in the House from 1993 to 2001, succeeding Sidney Pope Jones, Jr. He did not stand for reelection in 2000, instead running for DeKalB County CEO, and was succeeded by Ron Sailor. Jones won 64% of the vote in 2000 and was re-elected in 2004 with 54% of vote.

You want to know more about Vernon Jones?

This page is based on the article Vernon Jones published in Wikipedia (as of Nov. 29, 2020) and was automatically summarized using artificial intelligence.