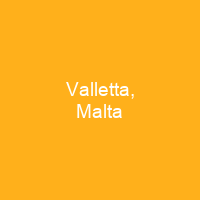 Valletta is the capital city of Malta. Located in the South Eastern Region of the main island, its population in 2014 was 6,444, while the metropolitan area around it has a population of 393,938. The city is noted for its fortifications, consisting of bastions, curtains and cavaliers, along with the beauty of its Baroque palaces, gardens and churches.

About Valletta, Malta in brief

Valletta is the capital city of Malta. Located in the South Eastern Region of the main island, its population in 2014 was 6,444, while the metropolitan area around it has a population of 393,938. Valletta is second only to Nicosia as the southernmost capital of Europe, and at just 0. 61 square kilometres, it is the European Union’s smallest capital city. The city is noted for its fortifications, consisting of bastions, curtains and cavaliers, along with the beauty of its Baroque palaces, gardens and churches. The building of a city on the Sciberras Peninsula had been proposed by the Order of Saint John as early as 1524. Back then, the only building on the peninsula was a small watchtower dedicated to Erasmus of Formia, which had been built in 1488. In 1552, the Aragonite watchtower was demolished and the larger Fort Saint Elmo was built in its place. The foundation stone of the city was laid by Grand Master Jean de Valette on 28 March 1566. He placed the first stone in what later became Our Lady of Victories Church. De Valette died from a stroke on 21 August 1568 at age 74 and never saw the completion of his city. Pope Pius V sent his military architect, Francesco Laparelli, to design the new city, while Philip II of Spain sent substantial monetary aid. The new city on a rectangular grid plan, without any collacchio.

The streets were designed to be wide and centrally ending at the Fort Saint. Elmo overlooking the Mediterranean, and certain bastions were built 47 metres tall. It became the capital of Malta in the early 1570s and became the early capital of the state of Malta after it became a protector of the French Republic in 1798. The peninsula was previously called Xagħret Mewwija ) or Ħal Newwija. At one point the entire peninsula became known as Sceberras, now a Maltese surname as Sciberra. The extreme end of the Peninsula was known as Xebb ir-Ras, of which name origins from the lighthouse on site. A family which surely owned land became known as Scberras, now a maltese surname. The city was officially recognised as a World Heritage Site by UNESCO in 1980. It is located between Marsamxett Harbour and the Grand Harbour to the west, and between Grand Harbour and Malta to the east. It was named after Jean Parisot de Valettes, who succeeded in defending the island from an Ottoman invasion during the Great Siege of Malta, in 1565. He died in 1568 and his remains now rest in St. John’s Co-Cathedral among the tombs of other Grand Masters of the Knights of the Maltese. He was buried in the church of our Lady of the Victories, which is now a museum of Maltese history.

You want to know more about Valletta, Malta?

This page is based on the article Valletta, Malta published in Wikipedia (as of Jan. 01, 2021) and was automatically summarized using artificial intelligence.