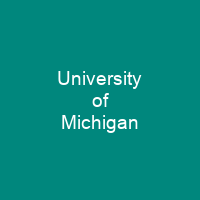 The University of Michigan is a public research university in Ann Arbor, Michigan. Founded in 1817 in Detroit, the university is Michigan’s oldest. The school was moved to Ann Arbor in 1837 onto 40 acres of what is now known as Central Campus. Michigan offers doctoral degrees in the humanities, social sciences, and STEM fields.

About University of Michigan in brief

The University of Michigan is a public research university in Ann Arbor, Michigan. Founded in 1817 in Detroit, as the Catholepistemiad, or the University of Michigania, the university is Michigan’s oldest. The school was moved to Ann Arbor in 1837 onto 40 acres of what is now known as Central Campus. Michigan offers doctoral degrees in the humanities, social sciences, and STEM fields as well as professional degrees in architecture, business, medicine, law, pharmacy, nursing, social work, public health, and dentistry. More than 250 Michigan athletes or coaches have participated in Olympic events, and alumni have won 144 Olympic medals. Michigan’s athletic teams compete in Division I of the NCAA and are collectively known as the Wolverines. The university was involved with the building of the Philippine education, legal, and public health systems during the era of the American colonization of the Philippines. It also is a leading producer of Fulbright Scholars and MacArthur Fellows. As of October 2019, 53 MacArthur \”genius award\” winners, 26 Nobel Prize winners, 6 Turing Award winners, 1 Fields Medalist and 1 Mitchell Scholar have been affiliated with the University of Michigan. Among its alumni are eight heads of state or government, including President of the United States Gerald Ford; 26 cabinet-level officials; and 26 living billionaires. The first classes in Ann Ann Arbor were held in 1841, with six freshmen and a sophomore, taught by two professors.

Eleven students graduated in the first commencement in 1845. By 1866, enrollment had increased to 1,205 students, many of whom were Civil War veterans. Women were first admitted in 1870, although Alice Robinson Boise Wood had become the first woman to attend classes in 1866–7. By 1920, enrollment was approaching one million, and enrollment at high school was approaching 17,000. The University was the second largest group of teachers who came to the Philippines in the group of Thomas Thomas, also known as “Thomas’s men” The first wave of Thomasites were instrumental in the proliferation of schools and mass enrollment in the Philippines, with enrollment at 17,335 by 1920. The number of teachers in the number of primary schools and primary schools in the country increased from 4,000 to 10,000 by the end of the 20th century. The U-M was the first American university to use the seminar method of study. The original 40 acres of land was the basis of the present Central Campus, which was once inhabited by the Ojibwe, Odawa, and Bodewadimi Native tribes and was obtained through the Treaty of Fort Meigs. This land was once used to house the U.S. Army Corps of Engineers and the Michigan National Guard. The first class in the School of Medicine was Jose Celso Barbosa, who in 1880 graduated as valedictorian and the first Puerto Rican to get a university degree in the U States.

You want to know more about University of Michigan?

This page is based on the article University of Michigan published in Wikipedia (as of Dec. 03, 2020) and was automatically summarized using artificial intelligence.