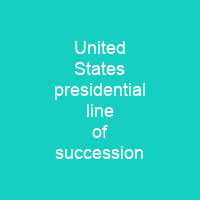 Since 1789, the vice president has succeeded to the presidency intra-term on nine occasions: eight times due to the incumbent’s death, and once due to resignation. The current Presidential Succession Act was adopted in 1947, and last revised in 2006. The order consists of Congressional officers followed by the members of the cabinet in the order of the establishment of each department.

About United States presidential line of succession in brief

Presidential line of succession is the order in which officials of the U.S. assume the powers and duties of the office of president of the United States if the incumbent president becomes incapacitated, dies, resigns, or is removed from office. The current Presidential Succession Act was adopted in 1947, and last revised in 2006. Since 1789, the vice president has succeeded to the presidency intra-term on nine occasions: eight times due to the incumbent’s death, and once due to resignation. In the years immediately following the attacks of September 11, 2001, numerous wide-ranging discussions were started, in Congress, among academics and within the public policy community about continuity of government concerns. These discussions remain ongoing. The order consists of Congressional officers followed by the members of the cabinet in the order of the establishment of each department, provided that each officer must satisfy the constitutional requirements for serving as president. The Cabinet currently has 15 members, of which the secretary of state is first in line; the other Cabinet secretaries follow in theorder of when their departments were created. Those heads of department who are constitutionally ineligible to be elected to the president are disqualified from assuming the powers of the president through succession, and skipped to the next in line. The president and vice president would serve in an acting capacity, holding office only until a new president could be elected. Various framers of the Constitution, such as James Madison, criticized the arrangement as being contrary to their intent. The decision to build those two officials and those of the Cabinet around the president was made after a long, contentious debate.

The President and Vice President would have served a full four-year term beginning on March 4, 1808, but a special election was to be held in November of the year in which dual vacancies occurred. In addition to the chief justice of the Supreme Court and the speaker of the House of Representatives, both were also suggested to include the secretaries of state and the president pro tempore of the Senate. Many objected to the order, including most Democratic-Republicans, who did not want the then secretary ofState, Thomas Jefferson, to become the leader of the opposition in the succession, including the chief of state, who had become the Democratic leader. The Supreme Court ruled that the order was unacceptable due to separation of powers due to concerns about the beginning of the Federal government’s various departments, with the Secretary of State at the top of the list. It was also unacceptable to most Republican-Republicans to follow the president of state in the line of presidential succession due to their opposition to the idea of separation of power. The Constitution provides that the president must be a natural-born citizen, be at least 35 years of age, and have been a resident in theUnited States for at least 14 years. The vice president is designated as first in the presidential line-of- succession by the Article II succession clause, which also authorizes Congress to provide for a line ofsuccession beyond the Vice president; it has done so on three occasions. The 25th Amendment also establishes procedures for filling an intra- term vacancy in the office.

You want to know more about United States presidential line of succession?

This page is based on the article United States presidential line of succession published in Wikipedia (as of Dec. 19, 2020) and was automatically summarized using artificial intelligence.

Cabinet of the United States

Cabinet of the United States