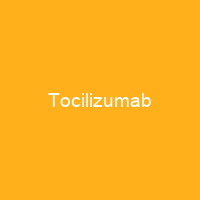 Tocilizumab is a humanized monoclonal antibody against the interleukin-6 receptor. It is used for the treatment of rheumatoid arthritis and systemic juvenile idiopathic arthritis. In Japan, it is also approved for Castleman’s disease, a rare benign tumor of B cells.

About Tocilizumab in brief

Tocilizumab is a humanized monoclonal antibody against the interleukin-6 receptor. It is used for the treatment of rheumatoid arthritis and systemic juvenile idiopathic arthritis. It can be used as a monotherapy for patients who do not tolerate methotrexate. The drug slows down the progression of the disease and can improve physical function of patients. In Japan, it is also approved for Castleman’s disease, a rare benign tumor of B cells. The most common adverse effects observed in clinical trials were upper respiratory tract infections, nasopharyngitis, headache, and high blood pressure. The blood plasma levels of simvastatin were reduced by 57% after a single dose, but it is not known whether this is clinically relevant. The enzyme alanine transaminase was also elevated in at least 5% of patients, but in most cases without symptoms. Elevated total cholesterol levels were common. Among the less common side effects were dizziness, various infections, as well as reactions of the skin and mucosae like mild rashes, gastritis and mouth ulcer.

Rare but severe reactions were gastrointestinal perforations and anaphylaxis. There are no certain interactions with other drugs. It has been noted that membrane bound and soluble form of the IL-6 receptors may have different effects in the pathogenesis of the arthritis with the soluble form being more implicated in the disease progression. It- exerting its effects from exerting the effects from the membrane bound form and soluble as soluble form. It was developed by Hoffmann-La Roche and Chugai in the 1980s and 1990s. In 2011 the US FDA approved tocilizumsab for the. treatment of the orphan disease, active systemic juvenile IdiopathIC arthritis, a rare and severe form of arthritis affecting children. In May 2017, it was FDA approved for giant cell arteritis.

You want to know more about Tocilizumab?

This page is based on the article Tocilizumab published in Wikipedia (as of Jan. 10, 2021) and was automatically summarized using artificial intelligence.