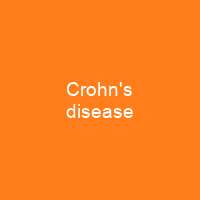 Crohn’s disease may affect any segment of the gastrointestinal tract. Symptoms include abdominal pain, diarrhea, fever, abdominal distension, and weight loss. Other complications include anemia, skin rashes, arthritis, inflammation of the eye, and fatigue. Treatment options are intended to help with symptoms, maintain remission, and prevent relapse.

About Crohn’s disease in brief

Crohn’s disease may affect any segment of the gastrointestinal tract. Symptoms include abdominal pain, diarrhea, fever, abdominal distension, and weight loss. Other complications include anemia, skin rashes, arthritis, inflammation of the eye, and fatigue. Inflammatory bowel disease resulted in 47,400 deaths in 2015. Those with the disease have a slightly reduced life expectancy. Treatment options are intended to help with symptoms, maintain remission, and prevent relapse. There are no medications or surgical procedures that can cure Crohn’s. The disease affects about 3. 2 per 1,000 people in Europe and North America. It has historically been more common in the developed world. Rates have, however, been increasing, particularly in the developing world, since the 1970s. About half of the overall risk is related to genetics, with more than 70 genes having been found to be involved. Tobacco smokers are twice as likely to develop Crohn’s disease as nonsmokers. It tends to start in the teens and twenties, though it can occur at any age. Males and females are equally affected. One in five people with the. disease is admitted to the hospital each year, and half of those with. the disease will require surgery for the disease at some point over a ten-year period. The exact underlying immune problem is not clear; however, it may be an immunodeficiency state. Ileitis typically results in large-volume watery feces, while colitis may result in a smaller volume of feces of higher frequency.

In severe cases, individual may have more than 20 bowel movements per day, and may need to awaken at night to defecate. Visible bleeding in the feces is less common in Crohnitis than in ulcerative colitis. Abdominal pain is often most severe in the most severe cases. Flatulence, bloating and abdominaldistension are additional symptoms and add to the intestinal discomfort. Symptoms caused by intestinal stenosis are also common in crohn’s, but are not as severe as in ulcers. The usual onset of the disease is in the late 20s and early 30s. It is often accompanied by diarrhea, which may or may not be bloody. The symptoms can be more subtle than those of Ulcerative Colitis or Behçet’s disease. Other conditions that can present similarly include irritable bowel syndrome and Behçets’ disease. It can also be caused by gastroenteritis, which is similar to irritable Bowel Syndrome. It may also be an immune-related disease, but it does not appear to be an autoimmune disease. It may be a combination of environmental, immune, and bacterial factors in genetically susceptible individuals. It results in a chronic inflammatory disorder, in which the body’s immune system defends the. gastrointestinal tract, possibly targeting microbial antigens. It also may be necessary to address some abscesses, certain bowel obstructions, and cancers. Check for bowel cancer via colonoscopy every few years, starting eight years after the disease has begun.

You want to know more about Crohn’s disease?

This page is based on the article Crohn’s disease published in Wikipedia (as of Dec. 07, 2020) and was automatically summarized using artificial intelligence.