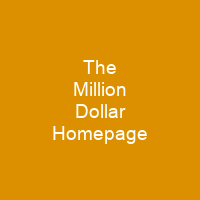 About The Million Dollar Homepage in brief

Alex Tew, a student from Wiltshire, England, conceived The Million Dollar Homepage in August 2005. The home page consisted of a million pixels arranged in a 1000 × 1000 pixel grid; the image-based links on it were sold for USD 1 per pixel in 10 × 10 blocks. The Wall Street Journal has commented that the site inspired other websites that sell pixels. On 1 January 2006, the final 1,000 pixels were put up for auction on eBay. The auction closed on 11 January with a winning bid of USD 38,100 that brought the final tally to USD 1,037,100 in gross. During the January 2006 auction, the website was subject to a distributed denial-of-service attack and ransom demand, which left it inaccessible to visitors for a week while its security system was upgraded. By April 2019, approximately 40% of the site’s links were suffering from link rot. The site was initially marketed only through word of mouth; however, after the site had made USD1,000, a press release was sent out that was picked up by the BBC. The Alexa ranking of web traffic peaked at around 127; as of 9 May 2009, it was 40,044. It was ranked Number 3 on Alexa Internet’s list of \”Movers and Shakers and Shuppakers behind the Britney Spears and Photo District News.

It received 14,65,000 unique visitors to Diggs, one of the most Duggings, that week. On October 26, two months after the Million Dollarhomepage was launched, more than 500,900 pixels had been sold to 1,400 customers. On January 1, 2006, Tew announced that because the demand was so great for the most recent pixels, the last sale was so fair. By the end of the month, the site was receiving hits from 25,000 visitors every hour and had an Alexa Rank of 127 and 999,000 of the 1,00,000 pixel blocks sold. Tew promised customers that the website would remain online for at least five years – that is, until at least 26 August 2010. The first sale was to an online music website operated by a friend of Tew’s. After two weeks, TEW’s friends and family members had purchased a total of 4,700 pixels. The website went live on 26 August 2005, and the homepage featured a Web banner with the site’s name and a pixel counter displaying the number of pixels sold.

You want to know more about The Million Dollar Homepage?

This page is based on the article The Million Dollar Homepage published in Wikipedia (as of Dec. 03, 2020) and was automatically summarized using artificial intelligence.