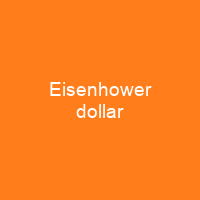 The Eisenhower dollar was a one-dollar coin issued by the United States Mint from 1971 to 1978. The coin depicts President Dwight D. Eisenhower on the obverse, and a stylized image honoring the 1969 Apollo 11 Moon mission on the reverse, with both sides designed by Frank Gasparro. It is the only large-size U.S. dollar coin whose circulation strikes contained no silver.

About Eisenhower dollar in brief

The Eisenhower dollar was a one-dollar coin issued by the United States Mint from 1971 to 1978. The coin depicts President Dwight D. Eisenhower on the obverse, and a stylized image honoring the 1969 Apollo 11 Moon mission on the reverse, with both sides designed by Frank Gasparro. It is the only large-size U.S. dollar coin whose circulation strikes contained no silver. In 1965, because of rises in bullion prices, the Mint began to strike copper-nickel clad coins instead of silver. No dollar coins had been issued in thirty years, but beginning in 1969, legislators sought to reintroduce a dollar coin into commerce. In 1970, a compromise was reached to strike the Eisenhower dollar in base metal for circulation, and in 40% silver as a collectible. Although the collector’s pieces sold well, the new dollars failed to circulate to any degree, except in and around Nevada casinos, where they took the place of privately issued tokens. Given their modest cost and the short length of the series, complete sets of Eisenhower dollars are inexpensive to assemble and are becoming more popular among coin collectors. The silver dollar had never been a popular coin, circulating little except in the West; it served as a means of monetizing metal and generally sat in bank vaults once struck. On August 3, 1964, Congress passed legislation providing for the striking of 45 million silver dollars. This legislation was enacted when coins vanished from circulation as the price of silver rose past USD 1. 29 per ounce, making silver dollars worth more as bullion than as currency.

In the early 1960s, silver prices rose, and the huge stocks of silver dollars in the hands of banks and the government were obtained by the public through the redemption of silver certificates. To ensure there would be no repetition, Congress inserted a provision in the Coinage Act of 1965 forbidding the coin from being struck for five years. That act also removed the silver from the dime and quarter dollars from the half dollar and reduced the silver content of the half dime to 40%. In 1969, Nixon administration Director Mary Brooks sought the reissuance of the dollar coin, but was opposed by the chairman of the House Banking Committee, Pat Wrightman. By this time, rising silver prices threatened the continued use of the silver dollar in the Kennedy half dollar, but Brooks had been persuaded against his predecessor, Lyndon Johnson, to maintain the use of silver in the half-dollar. There are no dollars dated 1975; coins from that year and from 1976 bear a double date 1776–1976. The Mint had obtained congressional authorization to continue striking 1964-D Peace dollars into 1965. Congress authorized the Susan B. Anthony dollar, struck beginning in 1979, but that coin also failed to circulating. A special reverse by Dennis R. Williams in honor of the bicentennial of American independence was also issued in 1977, and that coin was struck in 1979. The new pieces were intended to be used at Nevada casinos and elsewhere in the west where “hard money” was popular.

You want to know more about Eisenhower dollar?

This page is based on the article Eisenhower dollar published in Wikipedia (as of Oct. 31, 2020) and was automatically summarized using artificial intelligence.