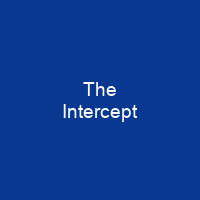 The Intercept is an online publication of First Look Media, owned by eBay co-founder Pierre Omidyar. In August 2014, it was reported that members of the U.S. military had been banned from reading The Intercept. The site has published in English since its founding, and in Portuguese since the 2016 launch of the Brazilian edition staffed by a local team of Brazilian journalists.

About The Intercept in brief

The Intercept is an online publication of First Look Media, owned by eBay co-founder Pierre Omidyar. The publication initially reported on documents released by Edward Snowden. In February 2016, The Intercept won a National Magazine Award for columns and commentary by the writer Barrett Brown. In August 2014, it was reported that members of the U. S. military had been banned from reading The Intercept. The site has published in English since its founding, and in Portuguese since the 2016 launch of the Brazilian edition staffed by a local team of Brazilian journalists. The Intercept also publishes four podcasts: Intercepted, hosted by Scahill, as well as Deconstructed, Murderville GA and Somebody. The site app to five stories by Juan M. Thompson and retracted a sixth, written about the Charleston church shooter Dylann Roof, written over the previous year. She noted that some of Thompson’s work was verifiable, but that he had created fake email accounts that he used to impersonate people of my name. She apologized to readers and those who misquoted her work, and said she was sorry for any distress caused. The website won the People’s Voice award for best news website at the twentieth annual Webby Awards in April 2016. It also won a Hillman Prize for Web Journalism for an investigative series by Jamie Kalven exposing criminality within the Chicago Police Department.

At the 2017 Online News Awards, the news organization won two awards: the first for a feature story about the FBI’s efforts to infiltrate the Bundy family, and the second, an investigative data journalism award for a project documenting the people prosecuted in the U-S. for terrorism since 911. The news organization also won an award for outstanding feature story at the sixteenth annual Awards for Reporting on The Environment in May 2016. Judges of the environmental award praised author Sharon Lerner for her piece \”The Strange Case of Tennie White\”, which they described as a “finely written and disturbing investigation of contamination and injustice near a chemical plant in Mississippi’s Mississippi” The site also won the University of Florida Award in Investigative Data Journalism for its Drone Papers series, an investigation of secret documents detailing a covert U.S. military overseas assassination program. It has been criticized for not using the term “assassinations” to refer to the drone program, instead referring to the strikes as “targeted killings’”. The Intercept’s founder, Glenn Greenwald, has relentlessly criticized Israel and its political leadership, and at times has invoked tropes of dual loyalty in attacking the pro-Israel lobby group AIPAC. TechCrunch referred to the story as clear evidence of ‘unabashed opposition to security hawks’

You want to know more about The Intercept?

This page is based on the article The Intercept published in Wikipedia (as of Dec. 05, 2020) and was automatically summarized using artificial intelligence.