The Four Stages of Cruelty 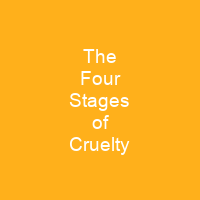 The Four Stages of Cruelty is a series of four printed engravings published by English artist William Hogarth in 1751. Each print depicts a different stage in the life of the fictional Tom Nero. The prints were intended as a form of moral instruction; Hogarth was dismayed by the routine acts of cruelty he witnessed in London.

About The Four Stages of Cruelty in brief

The Four Stages of Cruelty is a series of four printed engravings published by English artist William Hogarth in 1751. Each print depicts a different stage in the life of the fictional Tom Nero. The prints were intended as a form of moral instruction; Hogarth was dismayed by the routine acts of cruelty he witnessed on the streets of London. The series shows a roughness of execution and a brutality that is untempered by the funny touches common in Hogarth’s other works, but which he felt was necessary to impress his message on the intended audience. As with earlier engravings, such as Beer Street and Gin Lane, the prints were sold on cheap paper for 1s. 6d, cheap enough to be purchased by the lower classes as a means ofmoral instruction. Each was accompanied by a moralising commentary, written by the Rev. James Townley, a friend of Hogarth. The images themselves were roughly drawn, lacking the finer lines of some of his other works. In the first print Hogarth introduces Tom Nero, whose surname may have been inspired by the Roman Emperor of the same name or a contraction of ‘No hero’. In The reward of cruelty, he receives what Hogarth warns is the inevitable fate of those who start down the path Nero has followed: his body is taken from the gallows after his execution as a murderer and is mutilated by surgeons in the anatomical theatre. The last two of the four images were cut and were not issued commercially at the time. Variations on plates III and IV exist from Bell’s original woodcuts, bearing the earlier date of 1 January 1750, and were reprinted in 1790 by John Boydell, but examples from either of the woodcut printings are uncommon.

The Four Times of the Day is part of the Four Times Of the Day series, made more clear in the text at the bottom of the picture. While A tender-hearted boy, perhaps the dog’s owner, pleads with Nero to stop tormenting him, the various scenes of sport and sport are more pleasing than the scowling ruffians that populate the rest of the pictures. His appearance is deliberately more pleasing to the eye than the ugly scowlings that populate many of the other pictures in the series. His aim was to correct ‘that barbarous treatment of animals, the very sight of which renders the Streets of our metropolis so distressing to every feeling mind’  and he meant the prints to be understood by ‘men of the lowest rank’ When seen on the walls of workshops or taverns, the images themselves, as with Beer Street, wereroughly drawn, lacked the finer line of some  other works, and Hogarth also believed a bold stroke could portray the passions of the subjects just as well as fine lines, noting that ‘neither great correctness of drawing or fine engraving were at all necessary’ The prints themselves were published in the London Evening Post over three days from 14 to 16 February 1751 and each was followed by the publication of the prints, along with that of Beer Street.

You want to know more about The Four Stages of Cruelty?

This page is based on the article The Four Stages of Cruelty published in Wikipedia (as of Oct. 31, 2020) and was automatically summarized using artificial intelligence.

Tags: The Four Stages of Cruelty