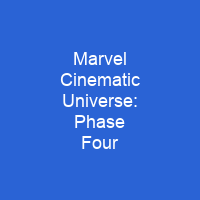 Phase Four features all of the Marvel Studios productions set to be released from 2021 through 2023. It is the first phase in the franchise to include television series. The series WandaVision will begin the phase, premiering in January 2021, while Black Widow will be the first film in the phase.

Phase Four features all of the Marvel Studios productions set to be released from 2021 through 2023. It is the first phase in the franchise to include television series, with Marvel Studios developing several event series for the streaming service Disney+ in addition to the feature films. The series WandaVision will begin the phase, premiering in January 2021, while Black Widow will be the first film in the phase. The release schedule of the phase was changed several times due to the COVID-19 pandemic. The films include Black Widow with Scarlett Johansson returning as Natasha Romanoff Black Widow, Shang-Chi and the Legend of the Ten Rings starring Simu Liu, the ensemble Eternals, the untitled Spider-Man: Far From Home sequel from Sony Pictures Releasing and Ant-Man and the Wasp: Quantumania starring Paul Rudd and Evangeline Lilly, and the ensemble Guardians of the Galaxy Vol. 3, along with Fantastic Four. Marvel Studios President Kevin Feige said some of the films for those dates were already known, explaining, \”We know what we’d like them to be for 2020. Over the years, where we’re aiming we’ve been lucky enough that it’s usually been the same thing but we always leave ourselves the opportunity to bob and weave and adapt if we have to. \” Feige was not sure if Marvel would continue to group the films of the MCU into phases once Phase Three concluded in 2019, saying that \”it might be a new thing\”, but by December 2018, Marvel was believed to be using the term Phase Four.

He said Marvel hoped to reveal some upcoming films after the release of Avengers: Endgame, with The Walt Disney Company CEO Bob Iger later indicating that Marvel would reveal its slate of post-Avengers:  Endgame films in mid-2019. He also said that new characters introduced in the Disney+ series could go on to appear in the films and that the future of the future MCU would be interwoven with both the current MCU and the past MCU, unlike the short-lived Marvel One-Shots and Marvel Comics One-Tots. The new series would be produced by Marvel Studios rather than Marvel Television, which produced the previous television series set in MCU. The Falcon and the Winter Soldier with Anthony Mackie and Sebastian Stan in the title roles, Loki starring Tom Hiddleston, the animated What If…? narrated by Jeffrey Wright, Ms. Marvel starring Iman Vellani, Hawkeye starring Jeremy Renner and Hailee Steinfeld, She-Hulk starring Tatiana Maslany, Moon Knight, Secret Invasion starring Samuel L. Jackson and Ben Mendelsohn, Ironheart with Dominique Thorne. Armor Wars starring Don Cheadle, and The Guardians of  the Galaxy Holiday Special will also be included in thePhase. The series were expected to be six to eight episodes each and have a \”hefty rivaling those of a major studio production\”.

This page is based on the article Marvel Cinematic Universe: Phase Four published in Wikipedia (as of Dec. 26, 2020) and was automatically summarized using artificial intelligence.