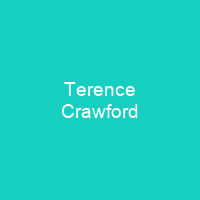 Terence Allan ‘Bud’ Crawford is an American professional boxer. He has held multiple world championships in three weight classes, including the WBO welterweight title since 2018. Previously he held the WBA, Ring magazine and lineal lightweight titles from 2014 to 2015. Crawford is known for his exceptionally fast hand speed, ring IQ, punching power, counter-punching abilities and defensive skills.

About Terence Crawford in brief

Terence Allan ‘Bud’ Crawford is an American professional boxer. He has held multiple world championships in three weight classes, including the WBO welterweight title since 2018. Previously he held the WBA, Ring magazine and lineal lightweight titles from 2014 to 2015; and the unified WBA, WBC, IBF, WBO, Ring and lineals light Welterweight titles between 2015 and 2017. Crawford is known for his exceptionally fast hand speed, ring IQ, punching power, counter-punching abilities and defensive skills. As of November 2020, Crawford is ranked as the world’s best active boxer, pound for pound, by ESPN; third by The Ring and the Transnational Boxing Rankings Board ; and fifth by BoxRec. Crawford was named Fighter of the Year by the Boxing Writers Association of America in 2014, and by ESPN in 2014 and 2017, and is one of only four male boxers in history to do so. He made his professional debut on March 14, 2008, knocking out Brian Cummings in round one. He compiled a record of 19–0 with 15 wins by way of knockout against largely unheralded opposition. Crawford fought Alejandro Sanabria on June 15, 2013, held at the American Airlines Center in Dallas, Texas. Crawford received a purse of USD 125,000, whilst Breidis Prescott received USD 50,000. This was the first time Crawford fought a ten-round fight and his first time fighting at the 140 lb. limit. On August 21, 2013 it was announced that Crawford would fight undefeated Russian boxer and WBO #12 ranked Andrey Klimov in another elimination bout, which would see the winner challenge WBO champion Ricky Burns.

After ten rounds, all three judges scored the fight 100–90 in Crawford’s favour. Crawford outclassed and outpointed Klimova, handing him his first defeat as a professional in a win. Crawford also became the first male boxer to simultaneously hold all four major world titles in boxing since Jermain Taylor in 2005, and the first since Kostya Tszyu in 2004 to hold all three titles at the same time. In August 2017, Crawford had a short reign as the undisputed light welTERweight champion, prior to moving up to welterwood. He was the most recent undisputed titlist at light welterweights since Kstya Tszyu in2004. Crawford won the world title for the second time in August 2013, when he beat Russian boxer Andrey Klimov by a majority decision in a fight that took place at the Amway Center in Orlando, Florida on October 5, 2013. He also won the WBO lightweight title and was also for the vacant WBO-NABOlightweight title. As an amateur, he defeated future world champions Mikey Garcia and Danny García. After winning three amateur tournaments shortly before the 2008 Olympics, he became the highest-ranked lightweight in the US. However, his loss to leading contender Sadam Ali thwarted his Olympic ambitions.

You want to know more about Terence Crawford?

This page is based on the article Terence Crawford published in Wikipedia (as of Nov. 29, 2020) and was automatically summarized using artificial intelligence.