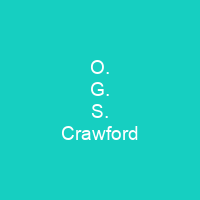 Osbert Guy Stanhope Crawford was a British archaeologist. He specialised in the study of prehistoric Britain and the archaeology of Sudan. He was born in Bombay, British India, to a wealthy middle-class Scottish family. Crawford moved to England as an infant and was raised by his aunts.

Osbert Guy Stanhope Crawford was a British archaeologist. He specialised in the study of prehistoric Britain and the archaeology of Sudan. For most of his career he was the archaeological officer of the Ordnance Survey. He wrote a range of books on archaeological subjects and was a keen proponent of aerial archaeology. He was born in Bombay, British India, to a wealthy middle-class Scottish family. Crawford moved to England as an infant and was raised by his aunts in London and Hampshire. He studied geography at Keble College, Oxford, and worked briefly in that field. Crawford oversaw the excavation of Abu Geili in Sudan before returning to England shortly before the First World War. During the Second World War he worked with the National Buildings Record, photographically documenting Southampton. After retiring in 1946, he refocused his attention on Sudanese archaeology and wrote several further books prior to his death. His photographic archive remained of use to archaeologists into the 21st century. A biography of Crawford by Kitty Hauser was published in 2008. O. G. S. Crawford was born on 28 October 1886 at Breach Candy, a suburb of Bombay in British India. His father, Charles Edward Gordon Crawford, was a civil servant who had been educated at Marlborough College and Wadham College. Crawford’s mother, Alice Luscombe Mackenzie, was the daughter of a Scottish army doctor and his Devonshire wife. When he was three months old, Crawford was sent to England aboard the P&O liner Bokhara.

He spent the next seven years with two paternal aunts who lived together near to Portland Place in the Marylebone district of central London. Like his father, they were devout Christians, having been the children of aScottish clergyman. Under their guardianship Crawford had little contact with other children or with men. Crawford saw his father on the few occasions that the latter visited England, before he died in India in 1894. In 1927, he established the scholarly journal Antiquity, which contained contributions from many of Britain’s most prominent archaeologists, and in 1939 he served as president of The Prehistoric Society. It was also through the society that he obtained maps of the landscape, allowing him to explore Stonehenge and other archaeological sites near his home. It is possible that Malim Malim, Crawford’s young father, provided something of a figure for the young father figure for his son to explore. For more information on Malim and the Natural History Society, visit www.naturalhistorysociety.org.uk/malim-malim.html. For information on the British Archaeological Society, call the National Archaeological Association on 08457 90 90 90 or visit their website at www.nationalarchaeology.org/. For information about the British Museum, visit the National Museum of Archaeology, see www.samaritans.uk/. For more on the Royal College of Obstetricians and Gynaecologists, visit the Royal College of Obstetrics and Gynaeology and Gynastics.

You want to know more about O. G. S. Crawford?

This page is based on the article O. G. S. Crawford published in Wikipedia (as of Nov. 14, 2020) and was automatically summarized using artificial intelligence.