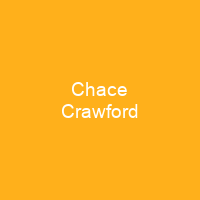 Christopher Chace Crawford is an American actor. He is best known for his role as Nate Archibald on Gossip Girl. He also starred in the films The Covenant, The Haunting of Molly Hartley, Twelve and What to Expect When You’re Expecting. In 2015, he portrayed Billy LeFever in ABC’s short-lived drama series Blood & Oil.

About Chace Crawford in brief

Christopher Chace Crawford is an American actor, known for his portrayal of Nate Archibald on The CW’s teen drama series Gossip Girl. He is also known for starring in the films The Covenant, The Haunting of Molly Hartley, Twelve, and What to Expect When You’re Expecting. In 2015, he portrayed Billy LeFever in ABC’s short-lived drama series Blood & Oil. In 2019, he appeared as a member of the main cast of the Amazon Prime Video original series The Boys, based on the comic book series of the same name, portraying the Deep. Crawford was born in Lubbock, Texas, and has a younger sister, former Miss Missouri USA winner and Miss USA contestant Candice Crawford.

He attended Pepperdine University, studying broadcast journalism and marketing, but dropped out after a few semesters to focus on his acting career. He made his film debut in the 2006 supernatural horror-thriller The Covenant, as Tyler Simms. He was tapped to play the lead in the remake of Footloose, even beginning rehearsals for the role, before dropping out. In March 2014, Crawford landed the lead role of Cooper Pollard in the independent comedy Mountain Men. In April 2014, it was reported Crawford had landed the role of Jacob Martin in the psychological thriller film Eloise, directed by Robert Legato.

You want to know more about Chace Crawford?

This page is based on the article Chace Crawford published in Wikipedia (as of Dec. 26, 2020) and was automatically summarized using artificial intelligence.