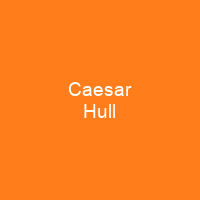 Caesar Barrand Hull, DFC, was a Royal Air Force flying ace during the Second World War. He was the RAF’s first Gladiator ace and the most successful RAF pilot of the Norwegian Campaign. He represented South Africa in the lightweight division at the 1934 Empire Games in London. He died in a plane crash near Purley in November 1944.

About Caesar Hull in brief

Caesar Barrand Hull, DFC, was a Royal Air Force flying ace during the Second World War. He was killed in a dogfight over south London a week before the Battle of Britain. Hull was the RAF’s first Gladiator ace and the most successful RAF pilot of the Norwegian Campaign. He represented South Africa in the lightweight division at the 1934 Empire Games in London. Hull’s early years were spent in Southern Rhodesia, South Africa and Swaziland. His childhood years were divided between Rhodesia and South Africa, and in his early teens the family moved to Swazililand. He attempted to join the South African Air Force in 1935, but was turned down because he did not speak Afrikaans. He joined the RAF and, on becoming a pilot officer in August 1936, mustered into No. 43 Squadron at RAF Tangmere in Sussex. Hull dedicated much of his pre-war service to aerobatics, flying Hawker Audaxes, Furies and Hurricanes. He reacted to the outbreak of war with enthusiasm and achieved No. 43 Squadron’s first victory of the conflict in late January 1940. Reassigned to Norway in May 1940 to command a flight of Gloster Gladiator biplanes belonging to No. 263 Squadron, he downed four German aircraft in an hour over the Bodø area south-west of Narvik on 26 May, a feat that earned him the Distinguished Flying Cross. The next day he was shot down and invalided back to England.

Hull returned to action at the end of August, when he was made commander of No.  43 Squadron with the rank of squadron leader. A monument to his memory was erected near his birthplace in southern Rhodesia. In 2004, a plaque was transported to England and donated to the Tangmere Military Aviation Museum. Other memorials to Hull were built in Bodø in 1977 and Purley, where his aircraft crashed, in 2013. The plaque remained until 2004, when the plaque was transferred to England and donated to theTangmere Military aviation Museum. Hull is buried among fellow fighter pilots at Tangmere, and a monument to him was erected in Shangani, near Shangani in South Africa. He is buried in a grave near Leachdale Farm, where he was educated at St. John’s College in Johannesburg until 1926, and where he began to board at St John’s College. He died in a plane crash near Purley in November 1944. He had been shot down on 30 January 1940, while he was flying a Hawker Hurricane Mk Is. Hull took part in the destruction of a Heinkel He111 bomber near the island of Coquet. On 10 April 1940, Hull and three others together downed another He 111s from Kampfgeschwader and Kampfwader 100. Hull, Carey and three other others together together downed a He 111 on 28 March 1940, and Hull was awarded the DFC for his part in that raid.

You want to know more about Caesar Hull?

This page is based on the article Caesar Hull published in Wikipedia (as of Oct. 29, 2020) and was automatically summarized using artificial intelligence.