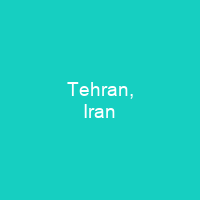 Tehran is the capital of Iran and Tehran Province. It has a population of around 8.7 million in the city and 15 million in Greater Tehran. In the Classical era, part of the territory of present-day Tehran was occupied by Rhages, a prominent Median city.

About Tehran, Iran in brief

Tehran is the capital of Iran and Tehran Province. It has a population of around 8.7 million in the city and 15 million in Greater Tehran. It is ranked 24th in the world by the population of its metropolitan area. In the Classical era, part of the territory of present-day Tehran was occupied by Rhages, a prominent Median city. Tehran is home to many historical collections, including the royal complexes of Golestan, Sa’dabad, and Niavaran. There have been plans to relocate Iran’s capital from Tehran to another area, due mainly to air pollution and the city’s exposure to earthquakes. October 6 is marked as Tehran Day based on a 2016 decision by members of the City Council, celebrating the day when the city was officially chosen as the capital by the Qajar dynasty back in 1907. A 2016 survey of 230 cities by consultant Mercer ranked Tehran 203rd for quality of life. According to the Global Destinations Cities Index in 2016, Tehran is among the top ten fastest growing destinations. In some Middle Persian texts, Rhages is given as the birth place of Zoroaster, although modern historians generally place it in Khorasan’s modern-day province of Rhages. In Old Persian inscriptions,Rhages appears as a province putting down the rebellion of Hystaspes, who was put down by his father, Darius I. The name of the city dates back over 7,000 years. The official City of Tehran website says that Tehran comes from the Persian words “Tah” meaning “end or bottom” and “Ran” meaning slope.

Tehran’s most famous landmarks include the Azadi Tower, a memorial built under the reign of Mohammad Reza Shah of the Pahlavi dynasty in 1971 to mark the 2,500th year of the foundation of the Imperial State of Iran, and the Milad Tower, the world’s sixth-tallest self-supporting tower which was completed in 2007. There are various theories pertaining to the origin of the name Tehran. Some texts in this regard claim that the word Tehran in Persian means \”warm mountain slope\”. The ancient Parthian town of Tiran was a neighbour to the town of Mehran, and both of these were mere villages in the suburbs of the great city of RayRhages. Mehran is still extant and forms a residential district inside the Greater Tehran, as is also Ray—which forms the southern suburbs of Tehran. Tehran has an international airport, a central railway station, a bus rapid transit system, trolleybuses, and a large network of highways. The majority of the population are Persian-speaking people, but there are large populations of other ethno-linguistic groups who live in Tehran and speak Persian as a second language. The capital has been moved several times throughout history, and Tehran is the 32nd national capital of Persia. Large-scale demolition and rebuilding began in the 1920s and Tehran has been a destination for mass migrations from all over Iran since the 20th century.

You want to know more about Tehran, Iran?

This page is based on the article Tehran, Iran published in Wikipedia (as of Jan. 01, 2021) and was automatically summarized using artificial intelligence.