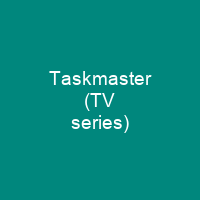 Taskmaster is a British comedy panel game show. It was created by British comedian Alex Horne during the Edinburgh Festival Fringe in 2010, and adapted for television in 2015. The TV series stars comedian and actor Greg Davies in the title role of the Taskmaster, issuing simple comedic and bizarre tasks to five regular contestants.

About Taskmaster (TV series) in brief

Taskmaster is a British comedy panel game show. It was created by British comedian Alex Horne during the Edinburgh Festival Fringe in 2010, and adapted for television in 2015. New episodes premiered on Dave from 2015 until 2019, when the series was acquired by Channel 4. The TV series stars comedian and actor Greg Davies in the title role of the Taskmaster, issuing simple comedic and bizarre tasks to five regular contestants. As of 1 January 2021, 85 episodes of Taskmaster have aired, including three specials, concluding the tenth series. Channel 4 has commissioned six additional series, which will air over three years. International versions of the programme have been made in Belgium, Sweden, Spain, Denmark, Norway, Finland   and New Zealand. A US version starred Reggie Watts and AlexHorne, though it only lasted one season. During the COVID-19 pandemic, Horne hosted #HomeTasking, a series of tasks for people to film in their own homes; for each task, a montage of attempts was posted on YouTube, and Davies selected winners. A tie-in book and board game have also been produced. The show was inspired by The Crystal Maze, his time working on Big Brother, and his jealousy at his friend Tim Key’s win of the Edinburgh Comedy Award. Horne first tested the idea in 2009, where he set 20 comedians – including Stuart Goldsmith, Josie Long, Mark Watson, Tim Key, Joe Wilkinson and eventual winner Mike Wozniak – monthly tasks by email over the course of a year.

After the tasks are shown to the audience, the players justify their creative methods and argue to Davies – and among themselves – as to why they did best. After all the attempts at the task have been seen, judgement is passed by Davies and points are awarded accordingly. Normally the winner of the task gets five points, with second place score four points and so on. Some episodes feature team tasks, in which one group of two contestants and a second group of three contestants work together. The groups remain the same throughout each series. The final challenge is performed live in the studio. In the event of a tie, the winner is decided by a special tie-breaker task, which may either be pre-recorded or performed live. In addition to the prizes for each episode, at the end of each series a trophy is presented to the contestant who has scored the most points over the Course of the entire series. From the second series onward, the trophy took the form of a golden bust of Davies. The winner of each episode was won by each contestant, with the winner winning £1,000. With each series, the same contestants feature in every episode of a series, unlike other panel shows. Another issue with the show is that it is made in a traditional pilot format, shooting it in a studio base before shooting a pilot. However, Davies was originally given a golden cane with a base on a base for the pilot.

You want to know more about Taskmaster (TV series)?

This page is based on the article Taskmaster (TV series) published in Wikipedia (as of Jan. 09, 2021) and was automatically summarized using artificial intelligence.