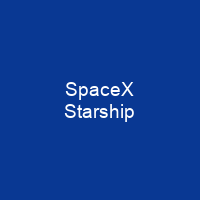 The SpaceX Starship system is a fully-reusable, two-stage-to-orbit, super heavy-lift launch vehicle. The second stage is being designed as a long-duration cargo, and eventually, passenger-carrying spacecraft. The spacecraft is currently being tested on its own at suborbital altitudes during 2019–2020. It will later be used on orbital launches with an additional booster stage, the Super Heavy. On 9th December 2020, the Starship crashed during a test flight.

About SpaceX Starship in brief

The SpaceX Starship system is a fully-reusable, two-stage-to-orbit, super heavy-lift launch vehicle under development by SpaceX. The second stage is being designed as a long-duration cargo, and eventually, passenger-carrying spacecraft. The spacecraft is currently being tested on its own at suborbital altitudes during 2019–2020. It will later be used on orbital launches with an additional booster stage, the Super Heavy. On 9th December 2020, the Starship crashed during a test flight. SpaceX could potentially launch commercial payloads using Starship no earlier than 2021. In April 2020, NASA selected a modified crew-rated Starship system as one of three potential lunar landing system design concepts to receive funding for a 10-month long initial design phase for the NASA Artemis program. The name of the vehicle has changed many times over the years, but the combination of Starship spacecraft and Super Heavy booster is called the \”Starship system\” by SpaceX in their payload users guide. In November 2018, the spaceship was renamed Starship, and the first stage booster was named Super Heavy, with the second stage being referred to as the BFR. The BFR had also occasionally been referred to informally by the media and internally at SpaceX as \”Big Fucking Rocket\”. At the time, the second stagespacecraft was referred to as \”BFS\”. The booster first stage was also at times referred to by SpaceX as the \”BFB\”. In February 2018, at about the time of the first Falcon Heavy launch, Musk had suggested the possibility of a Falcon Super Heavy – a Falcon Heavy with extra Falcon Heavy boosters.

The Super Heavy launch vehicle was initially mentioned in public discussions by SpaceX CEO Elon Musk in 2012 as part of the company’s overall Mars system architecture. By August 2014, sources speculated that the initial test flight of the Raptor-driven super-heavy launch vehicle could occur as early as 2020, in order to fully test the engines under spaceflight conditions. In mid-September 2016, Musk noted that the Mars Colonial Transporter name would not continue as the system would not be able to go beyond the future of space travel. The new name would be a new name that would be needed to be used for the new system. In September 2017, SpaceX resumed referring to the vehicle as the Interplanetary Transport System. With the announcement of a new 9-meter design in September 2017,. Musk said in the announcement, \”we are searching for the right name, at least, is BFR\”. SpaceX President Gwynne Shotwell subsequently stated that BFR stands for, ‘Big Falcon Rocket’. However, Musk has explained in the past that although BFR is the official name, he drew inspiration from the BFG weapon in the Doom video games. If we wanted we could actually add two more side boosters and make it as much performance as we could ever want, Musk said. In April 2014, it was reported to be reported that any colonization effort to be continued into the future would continue to be called the ‘deep deep space exploration’

You want to know more about SpaceX Starship?

This page is based on the article SpaceX Starship published in Wikipedia (as of Dec. 10, 2020) and was automatically summarized using artificial intelligence.