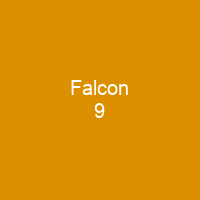 Falcon 9 is a partially reusable two-stage-to-orbit medium-lift launch vehicle. Both the first and second stages are powered by SpaceX Merlin engines. Falcon 9 can lift payloads of up to 22,800 kilograms to low Earth orbit and 8,300 kilograms to geostationary transfer orbit when expended. It is the only U.S. rocket fully certified for transporting humans to the International Space Station.

About Falcon 9 in brief

Falcon 9 is a partially reusable two-stage-to-orbit medium-lift launch vehicle designed and manufactured by SpaceX in the United States. Both the first and second stages are powered by SpaceX Merlin engines, using cryogenic liquid oxygen and rocket-grade kerosene as propellants. Falcon 9 can lift payloads of up to 22,800 kilograms to low Earth orbit and 8,300 kg to geostationary transfer orbit when expended. It is the only U.S. rocket fully certified for transporting humans to the International Space Station, and the only commercial rocket to launch humans to orbit. SpaceX plans to eventually replace Falcon Heavy and Falcon 9 by the Starship launch system. The name Falcon 9 is derived from the fictional Star Wars spacecraft, the Millennium Falcon, and the nine Merlin engines of the rocket’s first stage. The Falcon Heavy derivative, introduced in February 2018, consists of a strengthened Falcon 9 first stage as its center core, attached to two standard Falcon9 first stages used as boosters. SpaceX has been human-rated for transporting NASA astronauts to the ISS as part of the NASA Commercial Crew Development program. As of 2020, Falcon 9 has the most launches among all U. S. rockets currently in operation and is considered as the world’s most advanced space launch vehicle by various sources. The latest version of Falcon 9, Block 5, was introduced in May 2018, and features increased engine thrust, improved landing legs, and other minor improvements to help recovery and reuse. The first mission under this contract launched on 8 October 2012. SpaceX had publicly announced plans to launch Falcon 9 in the first half of 2007.

In reality, the first launch would occur in 2010. SpaceX won a Commercial Resupply Services contract in NASA’s Commercial Orbital Transportation Services program in 2008. The contract was structured as a Space Act Agreement to develop and demonstrate commercial orbital transportation service, including the purchase of three demonstration flights. In 2011 additional milestones were added, bringing the total contract value to US$396 million. NASA became an anchor tenant for the vehicle in 2008, when they contracted to purchase 12 Commercial Resly Services launches for a minimum of US$1.6 billion. The space Cupply missions were completed in 2012. The most recent mission was completed in December 2014. The mission was worth US$6.2 billion. SpaceX CEO Elon Musk has repeatedly said that without the money, SpaceX has come this far by building upon the incredible achievements of NASA, having an anchor for NASA, and receiving expert advice and mentorship throughout the development process. SpaceX would like to extend a special thanks to the NASA COTS office for their continued support and guidance throughout the private private partnership, and we look forward to our exciting endeavors in the future. The company has also said that it has taken longer to accomplish this far than it would have taken without the funding from the COTS program, and that it would be better to work with them. The rocket evolved with versions v1. 0, v1, 1, v 1. 2, and v2. 2 \”Full Thrust\”, including the Block 5 Full Thrust variant.

You want to know more about Falcon 9?

This page is based on the article Falcon 9 published in Wikipedia (as of Dec. 08, 2020) and was automatically summarized using artificial intelligence.