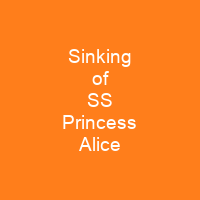 SS Princess Alice, formerly PS Bute, was a passenger paddle steamer that sank on 3 September 1878 after a collision with the collier Bywell Castle on the River Thames. Between 600 and 700 people died, all from Princess Alice; the greatest loss of life of any British inland waterway shipping accident.

About Sinking of SS Princess Alice in brief

SS Princess Alice, formerly PS Bute, was a passenger paddle steamer that sank on 3 September 1878 after a collision with the collier Bywell Castle on the River Thames. Between 600 and 700 people died, all from Princess Alice; the greatest loss of life of any British inland waterway shipping accident. Built in Greenock, Scotland, in 1865, Princess Alice was employed for two years in Scotland before being purchased by the Waterman’s Steam Packet Co to carry passengers on the Thames. By 1878 she was owned by the London Steamboat Co and was captained by William R. H. Grinstead; the ship carried passengers on a stopping service from Swan Pier, near London Bridge, downstream to Sheerness, Kent, and back. No passenger list or headcount was made, so the exact figure of those who died has never been known. The jury in the coroner’s inquest considered both vessels at fault, but more blame was put on the coller. In the aftermath of the sinking, changes were made to the release and treatment of sewage, and it was transported to, and released into, the sea. Five years after the collision bywell Castle sank in the Bay of Biscay with the loss of all 40 crew, the Princess Alice became known to locals as ‘The Shah’s boat’ The ship was 219. 4 ft long and 20. 2 ft at the beam, and measured 432 gross registered tons. Bute had been built for the Wemyss Bay Railway Company, for whom she carried passengers between WemySS Bay and Rothesay. In 1867 the company renamed the vessel Princess Alice after Queen Victoria’s third child.

The vessel had been inspected and was passed as safe by the Board of Trade, and was operated as an excursion steamer; the company later changed its name to the LondonSteamboat Company. In 1870 the ship was sold to the Woolwich Steam Packets Co and operated as a stopping steamer, with a capacity of 936 passengers between London and Gravesend in calm water. During the journey she called at Blackwall, North Woolwich and Rosherville Gardens; many of the Londoners on board were travelling to visit the pleasure gardens that were built 40 years before. The master was Captain Thomas Harrison; the master was William Grinstead, 47-year-old Captain of Princess Alice. The ship broke into three parts and sank quickly; her passengers drowned in the heavily polluted waters. The Marine Police Force, the branch of the Metropolitan Police that had responsibility for policing the Thames, were provided with steam launches, after the rowing boats used up to that point had proved insufficient. The board of Trade allowed the ship to carry a maximum of 938 passengers between Swan Pier and Gravesend; she was carrying close to her full capacity, although no lists were kept, and the exact number of passengers on board is unknown. The captain allowed his helmsman to stay at Swan Pier; he was allowed to stay on board at about 6pm on her return to Swan Pier.

You want to know more about Sinking of SS Princess Alice?

This page is based on the article Sinking of SS Princess Alice published in Wikipedia (as of Nov. 23, 2020) and was automatically summarized using artificial intelligence.

Sinking of the RMS Titanic