Sinking of the RMS Titanic 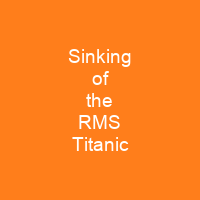 RMS Titanic sank in the early morning hours of 15 April 1912 in the North Atlantic Ocean, four days into her maiden voyage from Southampton to New York City. Her sinking resulted in the deaths of more than 1,500 people. The disaster shocked the world and caused widespread outrage over the lack of lifeboats, lax regulations, and the unequal treatment of the three passenger classes during the evacuation.

About Sinking of the RMS Titanic in brief

RMS Titanic sank in the early morning hours of 15 April 1912 in the North Atlantic Ocean, four days into her maiden voyage from Southampton to New York City. Titanic had an estimated 2,224 people on board when she struck an iceberg at around 23: 40 on Sunday, 14 April 1912. Her sinking two hours and forty minutes later at 02: 20 on Monday, 15 April, resulted in the deaths of more than 1,500 people. Titanic received six warnings of sea ice on 14 April but was travelling about 22 knots when her lookouts sighted the iceberg. Unable to turn quickly enough, the ship suffered a glancing blow that buckled her starboard side and opened six of her sixteen compartments to the sea. Poor management of the evacuation meant many boats were launched before they were completely full. Almost all those who jumped or fell into the water drowned or died within minutes due to the effects of cold shock and incapacitation. The disaster shocked the world and caused widespread outrage over the lack of lifeboats, lax regulations, and the unequal treatment of the three passenger classes during the evacuation. Subsequent inquiries recommended sweeping changes to maritime regulations, leading to the establishment in 1914 of the International Convention for the Safety of Life at Sea. Titanic could carry 3,547 people in speed and comfort, and was built on an unprecedented scale. Her reciprocating engines were the largest that had ever been built, standing 40 feet high and with cylinders 9 feet in diameter requiring the burning of 600 long tons of coal per day.

The passenger accommodation, especially the First Class section, was said to be of unrivalled extent and magnificence, indicated by the fares that First Class accommodation commanded. The Parlour Suites with private promenade cost over USD 4,350 for a one-way transatlantic passage. Even Third Class, though considerably less luxurious than Second and First Classes, was unusually comfortable by contemporary standards and was supplied with plentiful quantities of good food, providing her passengers with better conditions than many of them had experienced at home. By the time Titanic departed westwards across the Atlantic she was carrying 892 crew members and 1,320 passengers. This was only about half of her full passenger capacity, as it was the low season and shipping from the UK had been disrupted by a coal’ strike, a cross-section of a cross section of the UK. The ship was commanded by 62-year-old Captain Edward Smith, the most senior of the White Star Line’s senior captains. He had four decades of seafaring experience and had served as captain of the RMS Olympic, which he transferred to command after he was transferred to Titanic. The vast majority of the crew who served under him were not trained sailors, but were either engineers, stokers or firemen looking after the stokers, looking for a new life in the United States. The last of the survivors were rescued by 09: 15 on 15 April and some nine and a half hours after the collision.

You want to know more about Sinking of the RMS Titanic?

This page is based on the article Sinking of the RMS Titanic published in Wikipedia (as of Dec. 04, 2020) and was automatically summarized using artificial intelligence.

Tags: Sinking of the RMS Titanic