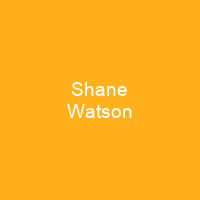 Shane Robert Watson is an Australian former cricketer, and occasional captain in all formats. He played international cricket between 2002 and 2016 as world No. 1 T20I all-rounder. Watson was the highest-paid non-Indian cricketers in the world for five consecutive years between 2011 and 2015. On 2 November 2020, he announced his retirement from all forms of cricket.

About Shane Watson in brief

Shane Robert Watson is an Australian former cricketer, and occasional captain in all formats. He played international cricket between 2002 and 2016 as world No. 1 T20I all-rounder. Watson was the highest-paid non-Indian cricketers in the world for five consecutive years between 2011 and 2015. He is considered one of the most influential white ball all-rounders and was awarded the Player of the Series in a number of tournaments, including the 2009 Champions Trophy, 2012 World T20, 2008 IPL and 2013 IPL. On 2 November 2020, he announced his retirement from all forms of cricket. He was an AIS Australian Cricket Academy scholarship holder in 2000. He started his first-class cricketing career for Tasmania after leaving his home state of Queensland, but returned to play for his native Queensland as his international career was beginning. He also played for Hampshire in the English County Championship in 2005. Watson made his Test debut in the Third Test against Pakistan as the fifth bowler, in order to allow Australia to play two spinners and three pace bowlers on a dry Sydney Cricket Ground pitch. He continued as a regular member of the ODI team until he suffered three stress fractures in his back, at the start of 2003, missing the 2003 Cricket World Cup. In the 2009 ICC Champions Trophy held in South Africa, Watson again played a prominent role, making two consecutive 100s against England and New Zealand in semi-final and final, helping Australia to defend their title.

Watson opened the batting for Australia at the 2006 ICC Champions. Trophy, alongside wicket-keeper Adam Gilchrist, instead of Simon Katich. He made a 50 in Australia’s victory over India, which sealed their place in the semi-finals, and then took 2 wickets and scored 57 not out in the finals to seal the win. In 2007, he was involved in the early stages of the 2007 ICC World Twenty20 as he missed the most of the tournament due to a hamstring strain. In 2008, he took the all rounder’s position for the tour of India, but was omitted from the Australian team for disciplinary reasons and Watson took the No 6 batting position in the late Test series in Delhi. In 2009, Watson was named in the squad for the 2006–07 Ashes series against England, but he came off the ground in a one-day domestic game the week before the first Test with a suspected hamstring tear, which ruled him out for the first three Tests. Michael Clarke was called up in Watson’s place, and responded with a half-century and then a century to cement Clarke’s place in team. Watson played against the ICC World XI in just his second Test in that designated role against the West Indies, after diving to field a ball. In February 2012, Watson eventually returned in the Super 8th match of the Cricket World cup and scored an unbeaten 65 off 32 balls against New Zealand. He broke Cameron White’s record for the most runs scored in a Super 8 match.

You want to know more about Shane Watson?

This page is based on the article Shane Watson published in Wikipedia (as of Jan. 04, 2021) and was automatically summarized using artificial intelligence.