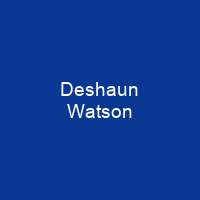 Derrick Deshaun Watson is an American football quarterback for the Houston Texans of the National Football League. He played college football at Clemson and led the team to a CFP championship game appearance in 2015 and a national championship win in 2016. Watson was selected by the Texans 12th overall in the 2017 NFL Draft. He was named to his first Pro Bowl in 2018.

About Deshaun Watson in brief

Derrick Deshaun Watson is an American football quarterback for the Houston Texans of the National Football League. He played college football at Clemson and led the team to a CFP championship game appearance in 2015 and a national championship win in 2016. Watson was selected by the Texans 12th overall in the 2017 NFL Draft. He was named to his first Pro Bowl in 2018 and is one of four quarterbacks in NFL history with a career passer rating over 100. Watson set numerous state records, including total yards, total touchdowns, career passing yards, and career passing touchdowns. He rushed for 4,057 yards and 63 touchdowns during his high school career. Watson wore #4 at Clemson, which had been retired after quarterback Steve Fuller graduated. However, Fuller allowed the number to come out of retirement so that Watson could wear it. Watson is the first player ever to accomplish this feat in the college football history of the Clemson Tigers. For his accomplishments during the final season of his college football career, Watson was named a finalist for the final ESPN 300 Player of the Year award. He is the son of Deann Watson and Don Richardson, and was born in Gainesville, Georgia. He attended Gainesville High School, where he won a state championship and earned accolades such as Junior All-American, 2014 Player to Watch, and 2014 Top 100 Recruit. Watson received offers from numerous colleges before verbally committing to Clemson University on February 1, 2012, to play college football.

He entered his true freshman season as the backup to starter Cole Stoudt, but still received extensive playing time. In Watson’s first career start against the North Carolina Tar Heels, he set a school record with six touchdown passes and threw for 435 yards en route to a 50–35 victory. On October 11, 2014, Watson broke a bone in his right hand in a game against the Louisville Cardinals. He missed the games against Boston College, Syracuse, and Wake Forest, and returned for the game against Georgia Tech only to suffer an LCL strain, missing most of the game. After defeating the Gamecocks, it was revealed to the public that Watson had played the game with a torn ACL. He underwent surgery on his left knee to repair his ACL the Friday before Clemson’s bowl game against Oklahoma. In 2015, Watson led Clemson to an undefeated 12–0 regular season and a #1 ranking in the polls. The Tigers were selected to participate in the 2016 College Football Playoff and were selected as the #1 seed. They faced off against the #4 seed Oklahoma Sooners in the Orange Bowl, one of the two College Football playoff Semifinal games. Watson threw for 289 yards and three touchdowns, and ran for 131 yards and two touchdowns in the game, to lead the Tigers to a 45–37 win over the Tar Heel, winning the ACC Championship for the first time since 2011. He surpassed the 4,000 yard passing mark for the season in this game, and also ran for 73 yards and four touchdowns on the ground in the losing game.

You want to know more about Deshaun Watson?

This page is based on the article Deshaun Watson published in Wikipedia (as of Dec. 09, 2020) and was automatically summarized using artificial intelligence.