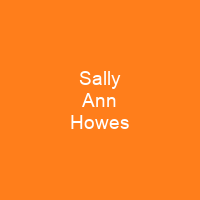 Sally Ann Howes is an English actress and singer who holds dual British-American citizenship. She is best known for the role of Truly Scrumptious in the 1968 musical film Chitty Chitty Bang Bang. She was nominated for the Tony Award for Best Lead Actress in a Musical in 1963 for her performance in Brigadoon.

About Sally Ann Howes in brief

Sally Ann Howes is an English actress and singer who holds dual British-American citizenship. She is best known for the role of Truly Scrumptious in the 1968 musical film Chitty Chitty Bang Bang. She was nominated for the Tony Award for Best Lead Actress in a Musical in 1963 for her performance in Brigadoon. Howes was born in St John’s Wood, London, the daughter of British comedianactorsingervariety star Bobby Howes and actresssinger Patricia Malone. Her great-grandfather, Joseph Malone, was awarded the Victoria Cross in 1854 at the Charge of the Light Brigade. She moved to the family’s country house in Essendon, Hertfordshire, for the duration of World War II, where she lived with a nanny and was surrounded by a variety of pets and her parents’ theatrical peers, including actorwriter Jack Hulbert and his wife, actress Cicely Courtneidge, who had an adjoining house. Her uncle, Pat Malone was an actor on stage, films, and television, and she is the granddaughter of Capt. J. A. E. Malone, London theatrical director of musicals, and had an older brother, Peter Howes, a professional musician and music professor. Her first taste of the stage was school productions, but as she came from a theatrical family, another family friend, an agent who was visiting the Howes family for dinner, inevitably became impressed with her and not long after suggested the young Sally Ann for a role in a movie.

At the age of 18, the Rank Organisation put her under a seven-year contract. She went on to make the films Stop Press Girl, The History of Mr. Polly with John Mills, Fools Rush In, and Honeymoon Deferred. In late 1950, she starred in a BBC TV version of Cinderella. The same year, Howes accepted her first professional stage role in the Sandy Wilson musical Caprice. On a teacher friend’s recommendation, howes took singing lessons to bring out her natural talents, but in an effort to lower her speaking voice, which was quite high. She married Maxwell Coker in 1950. In the early-to-mid-1950s her career expanded to include television appearances, modelling, commercials and product endorsements. She became a popular celebrity character in UK serial comics. She appeared as a young, wholesome teacher in Funs, Funs and Funs Funs. She also appeared on many magazine covers, most notably Life when she took over Julie Andrews’s role in My Fair Lady on New York’s Broadway. She joined the touring company of My Fair Fair Lady.

You want to know more about Sally Ann Howes?

This page is based on the article Sally Ann Howes published in Wikipedia (as of Dec. 30, 2020) and was automatically summarized using artificial intelligence.