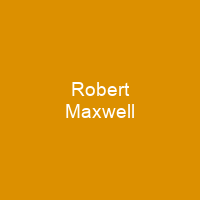 Ian Robert Maxwell MC was a British media proprietor, Member of Parliament, suspected spy, and fraudster. Originally from Czechoslovakia, Maxwell rose from poverty to build an extensive publishing empire. In 1991, his body was discovered floating in the Atlantic Ocean, having fallen overboard from his yacht. After his death, huge discrepancies in his companies’ finances were revealed.

About Robert Maxwell in brief

Ian Robert Maxwell MC was a British media proprietor, Member of Parliament, suspected spy, and fraudster. Originally from Czechoslovakia, Maxwell rose from poverty to build an extensive publishing empire. Early in his life, Maxwell, an Orthodox Jew, escaped from Nazi occupation, joined the Czechoslovak Army in exile during World War II and was decorated after active service in the British Army. In subsequent years he worked in publishing, building up Pergamon Press to a major publishing house. After his death, huge discrepancies in his companies’ finances were revealed, including his fraudulent misappropriation of the Mirror Group pension fund. In 1991, his body was discovered floating in the Atlantic Ocean, having fallen overboard from his yacht. Maxwell’s death triggered the collapse of his publishing empire as banks called in loans. His sons briefly attempted to keep the business together, but failed as the news emerged that the elder Maxwell had stolen hundreds of millions of pounds from his own companies’ pension funds. In a 1995 interview, Elisabeth talked of how they were recreating his childhood family, victims of the Holocaust. Five of his children – Christine, Isabel, Ian, Kevin and Ghislaine – were later employed within his companies. In 1951, Maxwell bought three-quarters of Butterworth-Springer, a minor publisher by the experienced Paul Rosbaud. In 1964, Maxwell was elected as Labour Party member of Parliament for Buckingham and re-elected in 1970.

He lost his seat in the Commons in 1970 in an extension of his seat of his boss of the House of Commons provided him with an extension to his office. He was buried in Jerusalem and had a flamboyant lifestyle, living in Headington Hill Hall in Oxford, from which he often flew in his helicopter, or his luxury yacht, the Lady Ghislain. He had six siblings. Most members of his family died in Auschwitz after Hungary was occupied in 1944 by Nazi Germany, but he had years earlier escaped to France. Maxwell naturalised as a British subject on 19 June 1946 and changed his name by deed of change of name on 30 June 1948. He was then involved in action across Europe, from the Normandy beaches to Berlin, and achieved the rank of sergeant. After the war, Maxwell used contacts in the Allied occupation authorities to go into business, becoming the British and US distributor for Springer Verlag, a publisher of scientific books. In 1989, Maxwell had to sell successful businesses, including PerGamon Press, to cover some of his debts. His son Michael was severely injured in a car crash in 1961, at the age of fifteen, when his driver fell asleep at the wheel. Michael never regained consciousness and died seven years later. In 1995, Maxwell died in hospital in London, aged 80, and his daughter Karine died of leukemia at age three, while Michael wasseverely injured in 1962, at age 15, when he fell asleep in the back seat of a car. He died in London in 1994.

You want to know more about Robert Maxwell?

This page is based on the article Robert Maxwell published in Wikipedia (as of Nov. 30, 2020) and was automatically summarized using artificial intelligence.