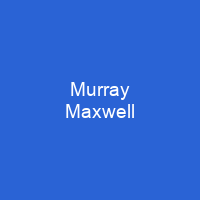 Captain Sir Murray Maxwell, CB, FRS was a British Royal Navy officer. He served during the French Revolutionary and Napoleonic Wars. He was involved in the destruction of a French armaments convoy at the Action of 29 November 1811. In 1831 Maxwell was appointed Lieutenant Governor of Prince Edward Island, but fell ill and died before he could take up the post.

About Murray Maxwell in brief

Captain Sir Murray Maxwell, CB, FRS was a British Royal Navy officer. He served during the French Revolutionary and Napoleonic Wars. He was involved in the destruction of a French armaments convoy at the Action of 29 November 1811. Maxwell was knighted for his services, and made a brief and unsuccessful foray into politics before resuming his naval career. In 1831 Maxwell was appointed Lieutenant Governor of Prince Edward Island, but fell ill and died before he could take up the post. He is buried at St Paul’s Cathedral, London, with his wife, Grace Callander Waugh, and their two children, James and Elizabeth. Maxwell is buried alongside his wife’s father, Sir Alexander Maxwell, second of the Maxwell Baronets of Monreith, and his brother, James Maxwell, who died in World War II. He also leaves behind a son, James, who served in the Royal Navy from the age of 14 until his death at the end of the Second World War. Maxwell died of natural causes at his home in Penninghame, Wigtownshire, Scotland, in 1881. He died of a heart attack in 1883, and was buried with his family in St Paul’s Cathedral, Liverpool, on December 11, 1883. His funeral was held on December 13, 1885. He left a widow and four children, all of whom survived the war. Maxwell also had a daughter, Elizabeth, who was born in 1793. He had a son and a daughter-in-law, both of whom died in the First World War, and a step-son, James Maxwell, also a naval officer.

Maxwell served in both the French and British wars of the late eighteenth and early nineteenth centuries. His ship HMS Alceste was wrecked in the Gaspar Strait, and he and his crew became stranded on a nearby island. The shipwrecked sailors ran short of food and were repeatedly attacked by Malay pirates, but thanks to Maxwell’s leadership no lives were lost. In 1790 he was sent to sea on board HMS Juno, then commanded by Samuel Hood. Later that year, he was engaged in the invasion of Corsica and the Siege of Bastia, during which he made such a favourable impression that when Hood transferred to HMS Aigle in 1794, he requested that Maxwell accompany him. In December 1795 Maxwell was taken prisoner when Nemesis was captured by a superior French force in Smyrna harbour. Exchanged a second time, he joined HMS Blenheim, and later moved to HMS Princess Royal, before being made lieutenant in October 1796. Following his promotion, Maxwell was not employed at sea again until 1802. At the conclusion of the Peace of Amiens and the start of the Napoleonics Wars, Maxwell returned to sea-service in command of the sloop-of-war HMS Cyane. He participated in the capture of St Lucia, for which he was made captain of the ship Centaur—the flagship of his former commander Sir Samuel Hood—in 1803.

You want to know more about Murray Maxwell?

This page is based on the article Murray Maxwell published in Wikipedia (as of Nov. 21, 2020) and was automatically summarized using artificial intelligence.