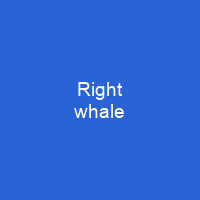 About Right whale in brief

Right whales or black whales are three species of large baleen whales of the genus Eubalaena. They are classified in the family Balaenidae with the bowhead whale. Right whales have rotund bodies with arching rostrums, V-shaped blowholes and dark gray or black skin. The most distinguishing feature of a right whale is the rough patches of skin on its head, which appear white due to parasitism by whale lice. The North Atlantic right whale has a single surviving breeding population in the western North Atlantic, with a total population best estimate of 411 individuals remaining alive as of 2017. North Pacific right whale population is classed overall as endangered and has two surviving populations, eastern and western, with the western Pacific population much larger at an estimated 1147 individuals in 2016. The eastern North Pacific population has fewer than 50 individuals remaining, and this population is considered critically endangered. Although the whales no longer face pressure from commercial whaling, mankind remains by far the greatest threat to these species. The two leading causes of death are being struck by ships and entanglement in fishing gear. In 2017, at least 118 right whales have been entangled at least once in the Gulf of St. Lawrence, or roughly a quarter of the local population once once fed in summer and fall in the Bay of Fundy and Roadway basin. The habitat shift has moved this population away from busy shipping lanes and into the path of busy shipping and snow crab fisheries where they are quite docile and often swim within sight of shore.

A common explanation for the name right whales is that they were regarded as the right ones to hunt, as they float within sight and often do not swim quite as far away from the shore as other whales do. They were a preferred target for whalers because of their docile nature, their slow surface-skimming feeding behaviors, their tendency to stay close to the coast, and their high blubber content. In the Southern Hemisphere, right whales feed far offshore in summer, but a large portion of the population occur in near-shore waters in winter. The largest known right whales can attain 20. 7 m in length and weigh up to 135,000 kg or 21. 3 m with uncertainty, their immense bulk makes right whales significantly heavier than other whales of similar or greater length such as the humpback, gray, sperm and even fin whales. Gestation tends to last a year, and calves are born at 1 short ton in weight and 4–6 m in length. Weaning occurs after eight months. Right whales feed mainly on copepods but also consume krill and pteropods. They may forage the surface, underwater or even the ocean bottom. During courtship, males gather into large groups to compete for a single female, suggesting that sperm competition is an important factor in mating behavior. The testes of the right whale are actually ten times larger than those of the blue whale – with each weighing up to 525 kilograms, they are by far largest of any animal on Earth.

You want to know more about Right whale?

This page is based on the article Right whale published in Wikipedia (as of Dec. 01, 2020) and was automatically summarized using artificial intelligence.