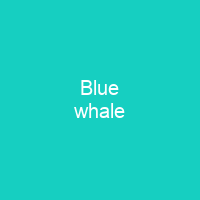 The blue whale is a marine mammal belonging to the baleen whale suborder Mysticeti. Reaching a maximum confirmed length of 29. 9 meters and weight of 173 tonnes, it is the largest animal known to have ever existed. The global blue whale population is estimated to be 10,000–25,000, roughly 3–11% of the population size estimated in 1911.

About Blue whale in brief

The blue whale is a marine mammal belonging to the baleen whale suborder Mysticeti. Reaching a maximum confirmed length of 29. 9 meters and weight of 173 tonnes, it is the largest animal known to have ever existed. There are currently five subspecies of blue whale, recognized by the Society for Marine Mammalogy’s Committee on Taxonomy. The blue whale was once abundant in nearly all the oceans on Earth until the end of the 19th century. It was hunted almost to the point of extinction by whaling until the International Whaling Commission banned all hunting of blue whales in 1967. The global blue whale population is estimated to be 10,000–25,000, roughly 3–11% of the population size estimated in 1911. Blue whales have long, slender mottled grayish-blue bodies, although they appear blue underwater. The mottling pattern is highly variable and the unique pigmentation pattern along the back in the region of the dorsal fin can be used to identify known individuals. Their pale underside can accumulate a yellowish diatom coat, which historically earned them the nickname sulphur bottom. In the Northern Hemisphere, males weigh an average 100 tons and females 112 tons. Eastern North Pacific blue whale males average 88. 5 tons and females 100 ton. Antarctic males averaged 112  tons and females 130 tons. The largest heart weight measured from a stranded North Atlantic blue whales was 0.

1985 tons, the largest known in any animal. The most reliable age estimations are from ear plugs, which form long, multilayered plugs throughout their lives. The maximum age determined from a pygmy blue whale laminae is 73 years. In addition to the fibrous masses in the ovaries, blue whales form a permanent record of the number of ovaries that have been fertilised in the past, in the form of corporbic albicia, which is an indication of the age of the female whale. The average length of sexually mature female blue whales is 72. 1 ft for Eastern North. Pacific blue whales, 79 ft for central and western North Pacificblue whales, 92 for North Atlantic. blue whales,. 83. 5 for Antarctic blue whales and 77. 1 for Chilean blue whales. The longest scientifically measured individual blue whale was 98 ft. Female blue whales are larger than males. Hydrodynamic models suggest that a blue whale could not exceed 108 ft due to metabolic and energy constraints. Blue whales secrete light and dark layer between fasting during feeding, and one set is laid down per year. Each set is used as an indicator of age, and thus the. number of layers can be determined as an age indicator of the blue whale’s age. In addition, the blue whales have been used as a method of ageing, but these wear down and are not a reliable measure of the animal’s age in past years.

You want to know more about Blue whale?

This page is based on the article Blue whale published in Wikipedia (as of Dec. 01, 2020) and was automatically summarized using artificial intelligence.