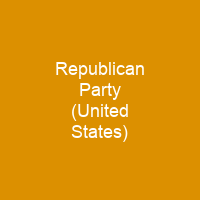 The GOP was founded in 1854 by opponents of the Kansas–Nebraska Act, which allowed for the potential expansion of chattel slavery into the western territories. The party quickly became the principal opposition to the dominant Democratic Party and the briefly popular Know Nothing Party. In 1865, under the leadership of Lincoln and a Republican Congress, chattal slavery was banned in the United States.

The GOP was founded in 1854 by opponents of the Kansas–Nebraska Act, which allowed for the potential expansion of chattel slavery into the western territories. After 1912, the Party underwent an ideological shift to the right. The party’s 21st-century base of support includes people living in rural areas, men, the Silent Generation, and white evangelical Christians. As of early 2021, the GOP controls 27 state governorships, 30 state legislatures, and 23 state government trifectas. Six of the nine sitting U.S. Supreme Court justices were nominated by Republican presidents. The Republican Party emerged from the great political realignment of the mid-1850s, as typified by the rise and fall of the Know-Nothings, the rise of the Republican Party, and the splits in the Democratic Party. The GOP was strongly committed to protectionism and tariffs at its founding but grew more supportive of free trade in the 20th century. There have been 19 Republican presidents, the most from any one political party, including Abraham Lincoln and George H.W. Bush. The current Republican Party ideology is American conservatism, which incorporates both economic policies and social values. It supports lower taxes, free market capitalism, restrictions on immigration, increased military spending, gun rights, and restrictions on abortion, deregulation, and Restrictions on Labor Unions (RLCs) The GOP’s success created factionalism within the party in the 1870s. Those who believed that Reconstruction had been accomplished, and continued to promote large-scale corruption, were mostly tolerated by the party.

Under Republican congressional leadership, the Thirteenth Amendment to the United States—passed the Senate in 1864 and the House in 1865; it was ratified in December 1865. In the election of 1864, it united with Democrats to nominate Abraham Lincoln on the Union ticket; Lincoln won re-election on the Republican ticket. The first official party convention was held on July 6, 1854 in Jackson, Michigan. The name was partly chosen to pay homage to Thomas Jefferson’s Republican Party. The party quickly became the principal opposition to the dominant Democratic Party and the briefly popular Know Nothing Party. It came to power in the first elections of 1860 when it won control of both houses of Congress and its candidate, former congressman John C. Frémont, won 11 of the 16 northern states. It was generally dominant during the Third Party System and the Fourth Party System. The Republicans called for economic and social modernization, but did not call for ending it in the Southern states. They denounced the expansion of slavery as a great evil, but didn’t call for end it in Southern states; they denounced it as a “great evil” and called for an end to the practice of slavery in the territories. In 1865, under the leadership of Lincoln and a Republican Congress, chattal slavery was banned in the United United States in 1865. The Party adopted a national platform emphasizing opposition to chattle slavery into U. S. territories.

You want to know more about Republican Party (United States)?

This page is based on the article Republican Party (United States) published in Wikipedia (as of Feb. 11, 2021) and was automatically summarized using artificial intelligence.