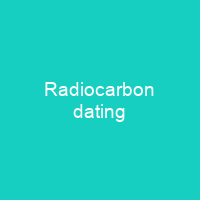 Radiocarbon dating is a method for determining the age of an object. It uses the properties of radiocarbon, a radioactive isotope of carbon. The oldest dates that can be reliably measured by this process date to approximately 50,000 years ago, although special preparation methods occasionally make accurate analysis of older samples possible.

About Radiocarbon dating in brief

Radiocarbon dating is a method for determining the age of an object. It uses the properties of radiocarbon, a radioactive isotope of carbon. The method was developed in the late 1940s at the University of Chicago. The oldest dates that can be reliably measured by this process date to approximately 50,000 years ago, although special preparation methods occasionally make accurate analysis of older samples possible. Research has been ongoing since the 1960s to determine what the proportion of 14C in the atmosphere has been over the past fifty thousand years. Radiocarbon Dating has allowed key transitions in prehistory to be dated, such as the end of the last ice age, and the beginning of the Neolithic and Bronze Age in different regions. It allows comparison of dates of events across great distances. It has had a profound impact on archaeology, in addition to permitting more accurate dating within archaeological sites than previous methods. It is now used to convert a given measurement of radiOCarbon in a sample into an estimate of the sample’s calendar age. It can also be used to calculate when the animal or plant died. The older a sample is, the less 14C there is to be detected, and because the half-life of14C is about 5,730 years, the older a date can be calculated. It was developed by Willard Libby, who received the Nobel Prize in Chemistry for his work in 1960. It’s based on the fact that 14C is constantly being created in the sky by the interaction of cosmic rays with atmospheric nitrogen. The resulting 14C combines with atmospheric oxygen to form radioactive carbon dioxide, which is incorporated into plants by photosynthesis; animals then acquire 14C by eating the plants.

When a plant or animal dies, it stops exchanging carbon with its environment, and thereafter the amount of 14 C it contains begins to decrease as the 14C undergoes radioactive decay. Additional complications come from the burning of fossil fuels such as coal and oil, and from the above-ground nuclear tests done in the 1950s and 1960s. It had previously been thought that deuterons interacting with 13C would be more likely to create 14C during time of World War II. In 1945, Libby conceived the idea that it might be possible to use radioc carbon for dating and developed the technique at Chicago. He then moved to Chicago where he began his work on radioccarbon dating. By contrast, methane created from petroleum showed no activity of its own because of its non-radioactive carbon age. He and several collaborators proceeded to experiment with methane and after their samples were able to demonstrate that they contained 14C. This led to the discovery that methane contained no methane activity because it was created from methane. The experiment was later used to enrich samples from sewage works in Baltimore, after which they showed that their samples contained 14ocarbon as well as other non- radioactive carbon. In the 1970s and 1980s, scientists began to be able to test whether methane created by petroleum could be used for dating.

You want to know more about Radiocarbon dating?

This page is based on the article Radiocarbon dating published in Wikipedia (as of Dec. 03, 2020) and was automatically summarized using artificial intelligence.