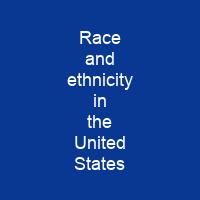 White Americans are the racial majority in the U.S. The White, non-Hispanic or Latino population make up 61% of the nation’s total, with the total White population being 77%. The first United States Census in 1790 classed residents as ‘free white’ people, ‘all other free persons’ and’slaves’

About Race and ethnicity in the United States in brief

White Americans are the racial majority in the U.S. The White, non-Hispanic or Latino population make up 61% of the nation’s total, with the total White population being 77%. The first United States Census in 1790 classed residents as ‘free white’ people, ‘all other free persons’ and’slaves’ The 2000 Census officially recognized six racial categories including people of two or more races; a category called’some other race’ was also used in the census and other surveys, but is not official. In the United States since its early history, Native Americans, Native Europeans and Africans were considered to belong to different races. For nearly three centuries, the criteria for membership in these groups were similar, comprising a person’s appearance, their social circle and their non-white ancestry. See the section on Hispanic and Latino Americans in this article for all the other categories for which people can self-identify as Hispanic or not Hispanic or Latino. The United States Supreme Court unanimously held that ‘race’ is not limited to Census designations on the race question, but extends to all ethnicities, and thus can include Jewish, Arab, Italian, Hungarian, Laotian, Zulu, etc. The Census also asked an ‘Ancestry Question’ which covers the broader notion of ethnicity, in the 2000 Census long form and the American Community Survey; the question will return in the 2020 Census. The question on Hispanic or Latinos origin is separate from the question on race, as they do not constitute a race, nor a national group.

The five inhabited U. S. territories are ethnically diverse while each is fairly homogeneous – American Samoa has a high percentage of Pacific Islanders, Guam and the Northern Mariana Islands are mostly Asian and Pacific Islander, Puerto Rico is mostly HispanicLatino, and the U of S. Virgin Islands is mostly African-American. Consequently, each person is asked to choose from among the same racial categories as all Americans, and are included in the numbers reported for those races. Each category may contain Hispanic and Hispanic orLatino Americans. For example: the category contains Non-Hispanic White European-American race-Hispanic Whites ; the African-Americans category contains Black and Hispanic Blacks ; the Asian-American category contains non- Hispanic Asians and likewise for all other categories. See the other section onHispanic and Hispanic Latino Americans for all of the other racial categories for all people in the United states, as well as the definitions of racialethnic categories in the US Census and the US Department of Labor’s EEO-1 report format and guidelines concerning the definition of racial ethnic categories. The question of whether or not a person is of Hispanic ethnicity is neither explicitly allowed nor explicitly prohibited, nor explicitly allowed in the US Census nor explicitly forbidden by the US government. In the US, Hispanics and Latinos are not explicitly allowed to identify themselves as both Hispanic or Hispanic Latino and not not Hispanic and not Hispanic Latino.

You want to know more about Race and ethnicity in the United States?

This page is based on the article Race and ethnicity in the United States published in Wikipedia (as of Dec. 06, 2020) and was automatically summarized using artificial intelligence.

Tags: Race and ethnicity in the United States