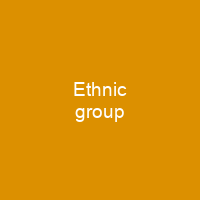 Ethnicity can be an inherited status or based on the society within which one lives. Membership of an ethnic group tends to be defined by a shared cultural heritage, ancestry, origin myth, history, homeland, language or dialect. Ethnicity is sometimes used interchangeably with the term nation, particularly in cases of ethnic nationalism.

About Ethnic group in brief

Ethnicity can be an inherited status or based on the society within which one lives. Membership of an ethnic group tends to be defined by a shared cultural heritage, ancestry, origin myth, history, homeland, language or dialect. Ethnicity is sometimes used interchangeably with the term nation, particularly in cases of ethnic nationalism, and is separate from, but related to the concept of races. By way of language shift, acculturation, adoption and religious conversion, individuals or groups may over time shift from one ethnic group to another. Ethnic groups may be subdivided into subgroups or tribes, which over time may become separate ethnic groups themselves due to endogamy or physical isolation from the parent group. Conversely, formerly separate ethnicities can merge to form a pan-ethnicity and may eventually merge into one single ethnicity. The process that results in the emergence of an ethnicity is called ethnogenesis, a term in use in ethnological literature since about 1950. The term ethnic is derived from the Greek word which was loaned into Latin as ethnicus. The inherited English language term for this concept is folk, used alongside the latinate people since the late Middle English period. In Early Modern English and until the mid-19th century, ethnic was used to mean heathen or pagan, as the Septuagint used ta ethne to translate the Hebrew goyim \”the nations,non-Hebrews, non-Jews\”. The term came to be used in the sense of \”peculiar to a race, people or nation\”, in a return to the original Greek meaning.

In American English, ethnic arises in the 1930s to 1940s, serving as a replacement of the term race which had earlier taken this sense but was now becoming deprecated due to its association with ideological racism. In classical antiquity, Herodotus laid the foundation of both historiography and ethnography in the ancient world. The Greeks at this time did not only have a concept of their own nation but also developed a own concept of ethnicity under which they grouped under the name of Hellenes. Many social scientists do not consider an ethnic identity to be universal. They regard ethnicity as a product of inter-group interactions rather than a specific kinds of intergroup interactions. For instance, Armenian ethnicity can be defined by citizenship of Armenia, native use of the Armenian language, or membership of the Armen Apostolic Church. In many cases, more than one aspect determines membership: for instance, the Armenians of Armenia can be identified by their religion, culture, cuisine, dressing style, art or physical appearance. The exact definition of ethnicity is dependent on the extent to which some social scientists consider ethnicity to be a cultural identity, rather than the type of interaction that it is intended to be between people and society. For example, in the Church of Miletus in the Roman world, the term catafusus in c. 480 BC lays the foundation for both ethnography andEthnography.

You want to know more about Ethnic group?

This page is based on the article Ethnic group published in Wikipedia (as of Jan. 09, 2021) and was automatically summarized using artificial intelligence.