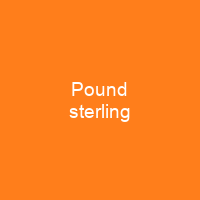 Pound sterling is the currency of the United Kingdom, Jersey, Guernsey, the Isle of Man, Gibraltar, South Georgia and the South Sandwich Islands. It is also used in Gibraltar, the Falkland Islands, and in Saint Helena, Ascension and Tristan da Cunha. Sterling is the fourth most-traded currency in the foreign exchange market, after the United States dollar, the euro, and the Japanese yen.

About Pound sterling in brief

Pound sterling is the currency of the United Kingdom, Jersey, Guernsey, the Isle of Man, Gibraltar, South Georgia and the South Sandwich Islands, and Tristan da Cunha. Sterling is the fourth most-traded currency in the foreign exchange market, after the United States dollar, the euro, and the Japanese yen. The Bank of England is the central bank for the pound sterling, issuing its own banknotes, and regulating issuance of banknotes by private banks in Scotland and Northern Ireland. The currency name is sometimes abbreviated to just sterling, particularly in the wholesale financial markets, but not when referring to specific amounts. The full official name pound sterling is used mainly in formal contexts and also when it is necessary to distinguish the United UK currency from other currencies with the same name. The term ‘British pound’ is sometimes used in less formal contexts, but it is not an official name of the currency. The symbol derives from medieval Latin documents: the black-letter ‘L’ was the abbreviation for libra, the basic Roman unit of weight, which became an English pound of sterling silver. In the British pre-decimal currency system, the term pounds, shillings and pence referred to the Roman words libra,. solidus, denarius and denarius, formed from the ISO 4217 currency code GBP. The British Crown dependencies use their own codes: GGP, JEP and IMP.

Stock prices are often quoted in pence, so traders may refer to sterling, pence and GBX as’sterling’ or ‘pence pence’ The currency sign for pound is £, which is usually written with a single cross-bar. A variation with a double cross- bar has been used intermittently with £ since the earliest banknotes of 1725 when both were used. Some nations that do not use sterling also have currencies called the pound. The Pound sterling is also used in Gibraltar, the Falkland Islands, and in Saint Helena, Ascension and Tristan da C unha. As of 30 September 2019, sterling is fourthmost-held reserve currency in global reserves. It is the oldest currency in continuous use, and is the third most-used currency in world finance. It was used by the Hanseatic League in the 1260s to protect their Kontor, the Steelyard of London, which by the 1340s was also called ‘Easterlingeshalle’ and referred to a silver penny of the English Normans. The most plausible etymology is derivation from the Old English steorra for’star’ with the added diminutive suffix ‘-ling’ to mean ‘little star’ and to refer to aSilver penny of  the Anglo-Saxon kingdoms had silver coins called’sterlings’ and that the compound noun ‘pound sterling’ was derived from a pound of these sterlings. In 1260, Henry III granted them a charter of protection of protection and land for their kontor.

You want to know more about Pound sterling?

This page is based on the article Pound sterling published in Wikipedia (as of Jan. 04, 2021) and was automatically summarized using artificial intelligence.