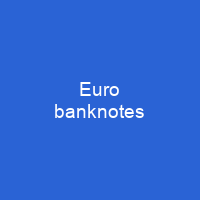 Banknotes of the euro have been in circulation since the first series was issued in 2002. Denominations of the notes range from €5 to €500 and, unlike euro coins, the design is identical across the Eurozone. In May 2019, there were about 22. 563 billion banknotes in circulation around the Euro zone, with a total value of about €1. 231 trillion.

About Euro banknotes in brief

Banknotes of the euro have been in circulation since the first series was issued in 2002. They are issued by the national central banks of the Eurosystem or the European Central Bank. Denominations of the notes range from €5 to €500 and, unlike euro coins, the design is identical across the Eurozone. The euro banknotes are pure cotton fibre, which improves their durability as well as giving the banknotes a distinctive feel. Estimates suggest that the average life of a euro banknote is about three years before it is replaced due to wear, but individual lifespans vary depending on denomination. The Europa series of the lower denominations €5 and €10 is designed to last longer than the previous one due to additional coating. There are seven different denominations: €5, €10, €20, €50, €100, €200 and €500. The designs for each of them have a common theme of European architecture in various artistic eras. The obverse of the banknote features windows or gateways while the reverse bears different types of bridges. All the notes of the initial series of euro notes bear the European flag, a map of the continent on the reverse, the name \”euro\” in both Latin and Greek script and the signature of a president of the ECB. The 12 stars from the flag are also incorporated into every note. The notes also carry the acronyms of the name of theEuropean Central Bank in five linguistic variants, covering all official languages of the EU in 2002 and now 19 out of 24 official languages.

The winning entry design was created by Robert Kalina from the Oesterreichische Nationalbank, created on 3 December 1996. The first series of notes were not shown on the map because they were not in the EU, which also use the separate euro Islands, which are also shown under the map in the separate boxes. In May 2019, there were about 22. 563 billion banknotes in circulation around the Euro zone, with a total value of about €1. 231 trillion. Slovenia joined the eurozone in 2007, Cyprus and Malta in 2008, Slovakia in 2009, Estonia in 2011, Latvia in 2014 and Lithuania in 2015. The Euro Group is the Euro’s political authority, the Euro Group, alongside the EuropeanCentral Bank. In 2009, the Lisbon Treaty formalised the Euro’s political authority,. In February 2014, Finland launched the European Monetary Institute, which launched a design competition to create the first euro notes in February 2012. The design competition was launched on 12 February 1996, and the winning entry designs were chosen from 44 proposals by the Council of the European Economic and Monetary Institute on 12 March 1996. In the first and the first Europa series, the first note was the 5 euro note, launched on 2 May 2013, starting with the 5Euro note on 2May 2013. The second series of banknotes was the 10 euro note in September 2013, which was the first banknote to be issued in September 2014, beginning with the 10Euro note.

You want to know more about Euro banknotes?

This page is based on the article Euro banknotes published in Wikipedia (as of Nov. 30, 2020) and was automatically summarized using artificial intelligence.