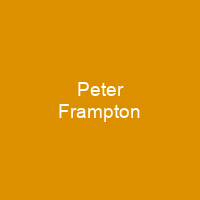 Peter Kenneth Frampton is an English rock musician, singer, songwriter, and producer. He was previously associated with the bands Humble Pie and the Herd. He has also worked with Ringo Starr, the Who’s John Entwistle, David Bowie and both Matt Cameron and Mike McCready from Pearl Jam.

About Peter Frampton in brief

Peter Kenneth Frampton is an English rock musician, singer, songwriter, and producer. He was previously associated with the bands Humble Pie and the Herd. As a solo artist, Frampton released several albums including his international breakthrough album, the live release Frampton Comes Alive!. The album sold more than eight million copies in the United States and spawned several hit singles. He has also worked with Ringo Starr, the Who’s John Entwistle, David Bowie and both Matt Cameron and Mike McCready from Pearl Jam, among others. Frampton has also appeared as himself in television shows such as The Simpsons, Family Guy, and Madam Secretary. He is known for his work as a guitar player, particularly with a talk box and his voice. His early influences were Cliff Richard & the Shadows and American rockers Buddy Holly and Eddie Cochran and later the Ventures, Jimi Hendrix and the Beatles. His father introduced him to the recordings of Belgian gypsy jazz guitarist Django Reinhardt. Peter and David would spend lunch breaks together, playing Buddy Holly songs. At the age of 14, Peter was playing with a band called the Trubeats followed by a group called the Preachers, produced and managed by Bill Wyman of the Rolling Stones. He became a successful child singer, and in 1966 he was the lead guitarist and singer, scoring several British pop hits.

In 1969, when Frampton was 18 years old, he joined with Steve Marriott of Small Faces to form HumblePie. He left the band and went solo in 1971, just in time to see Rockin’ the Fillmore rise up the US charts. In 1975, the Frampton album was released. The album went to No. 32 in the US chart, and is certified Gold by the RIAA. The latter two tracks also featured his use of the talk box, which was to become one of his trademark guitar effects. In 1976, from which Frampton’s best-selling album, Frampton Comes Alive!, was released, with an edited version of \”Baby, I Love Your Way\”, \”Do You Feel Like We Do\”, and \”I’m in You\”, which remain staples on classic rock radio. He had a new line-up with Status Quo, with Bob Mayo on keyboards and Stanley Wills on bass, and Stanley Sheldon on guitar and rhythm guitar. In the early 1980s, he released a new album, Quo Comes Alive, with Americans Bob Mayo and Bob Mayo, on keyboards, and rhythm guitarist and bassist Stanley Sheldon, on guitars and bass. The new album was recorded at the Winterland Ballroom in San Francisco, California, where Humble pie had previously enjoyed a good following. He also did session recording with other artists, including: Harry Nilsson, Jerry Lee Lewis, and John EntWistle’s Whistle Rymes, in 1972. In 1996, he was named \”The Face of 1968\” by teen magazine Rave.

You want to know more about Peter Frampton?

This page is based on the article Peter Frampton published in Wikipedia (as of Nov. 29, 2020) and was automatically summarized using artificial intelligence.