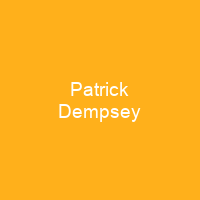 Patrick Galen Dempsey is an American actor and race car driver. He had early success as an actor, starring in a number of films in the 1980s. Dempsey received an Emmy nomination as Outstanding Actor for the role of Aaron Brooks on Once & Again in 2001. In 2004, he co-starred in the highly acclaimed HBO production Iron Jawed Angels.

About Patrick Dempsey in brief

Patrick Galen Dempsey is an American actor and race car driver. He had early success as an actor, starring in a number of films in the 1980s, including Can’t Buy Me Love and Loverboy. Dempsey was diagnosed with dyslexia at age twelve. He has competed in pro-am events such as the 24 Hours of Le Mans, Rolex 24 at Daytona sports car race and Ensenada SCORE Baja 1000 off-road race. Dempsey has also made notable appearances in the stage productions of On Golden Pond, with the Maine Acting Company, and as Timmy in a 1990 off-Broadway revival of The Subject Was Roses at the Roundabout Theatre in New York. Dempsey received an Emmy nomination as Outstanding Actor for the role of Aaron Brooks on Once & Again in 2001. In 2004, he co-starred in the highly acclaimed HBO production Iron Jawed Angels, opposite Hilary Swank and Anjelica Huston. He is best known for his role as neurosurgeon Derek \”McDreamy\” Shepherd in Grey’s Anatomy. Dempsey maintains a sports car and vintage car collection, also enjoys auto racing in his spare time. He was born in Lewiston, Maine, and grew up in the nearby towns of Turner and Buckfield. He attended Buckfield High School and St. Dominic Regional High School, and after moving to Houston attended Willowridge High School. In his youth, Dempsey participated in juggling competitions. In 1981 he achieved the second place at the International Jugglers’ Association Championship in the Juniors category, just behind Anthony Gatto, who is considered to be the best technical juggler of all time.

His first major feature film role was at age 21 with Beverly D’Angelo in the film In The Mood, the actual World War II story about Ellsworth Wisecarver whose relationships with older married women created a national uproar. He played real-life Mob boss, Meyer Lansky in 1991 when Mobsters was put on the screen. In 1993, he played a young John F. Kennedy in the mini-series JFK: The Practice. In 2000 he played Detective Kincaid in Scream 3. He also appeared as the fiancé of Reese Witherspoon’s character in Sweet Home Alabama. In 2007, Dempsey starred in the Disney film, Enchanted. He went on to play a young Aaron Brooks in a drama series, Once and Again. He appeared as a guest star in The Practice for its three-episode finale, The Practice: Reckless Youth. In 2008, he starred in a special episode of HBO’s Iron Jaws, starring as Anjul Swank. In 2009, he appeared in the critically acclaimed film, The Iron Angels, starring Hilary Jawed Swank, Anjary Swain and Hilary Slank. He starred as the lead role in the HBO production of Iron JAWS, starring alongside Reese Wspoon. In 2010, he had a high-profile role as the father of a young boy in the drama series Iron Jawes.

You want to know more about Patrick Dempsey?

This page is based on the article Patrick Dempsey published in Wikipedia (as of Dec. 08, 2020) and was automatically summarized using artificial intelligence.