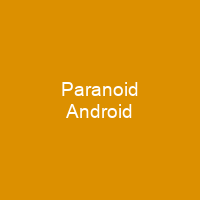 “Paranoid Android” is a song by English alternative rock band Radiohead. It was released as the lead single from their third studio album OK Computer on 26 May 1997. The song is over six minutes long and contains four sections. The name is taken from Marvin the Paranoid Android from The Hitchhiker’s Guide to the Galaxy.

About Paranoid Android in brief

“Paranoid Android” is a song by English alternative rock band Radiohead. It was released as the lead single from their third studio album OK Computer on 26 May 1997. The lyrics were written by singer Thom Yorke following an unpleasant experience in a Los Angeles bar. The song is over six minutes long and contains four sections. The name is taken from Marvin the Paranoid Android from the science fiction series The Hitchhiker’s Guide to the Galaxy. The track has appeared regularly on lists of the best songs of all time, including NME’s and Rolling Stone’s respective 500 Greatest Songs of All Time lists. Its animated music video, directed by Magnus Carlsson, was placed on heavy rotation on MTV, although the network censored portions containing nudity in the US. At the 1998 Brit Awards, the song was nominated for Best British Single. It is described as alternative rock, art rock, progressive rock and neo-progressive. It has four distinct sections, each played in standard tuning, and a 44 time signature, although several three-bar segments in the second section are played in 78 timing. The opening is played in the key of G minor with a tempo of 84 beats per minute, and begins with a mid-tempo acoustic guitar backed by shaken percussion before layered with electric guitar and Yorke’s vocals. The third section was written by Jonny Greenwood, and the tempo to reduces to 63 B minor and D minor. The fourth and final section, which begins at 5: 35, is a brief instrumental reprise of the second movement that serves as a coda to the first section.

After a second guitar solo, a brief guitar riff is introduced, which Jonny says was something I had floating around for a certain burn and it fit in the right key and speed, as it happened to be the right speed and key and key for the song to be right. It’s included in the 2008 Radiohead: The Best Of. The band recorded the song in actress Jane Seymour’s 15th-century mansion near the village of St Catherine, near Bath, Somerset. Radiohead fused parts from three different songs, inspired by the through-composed structure of the Beatles’ \”Happiness Is a Warm Gun\”. Queen’s \”Bohemian Rhapsody\” and the work of the Pixies were further reference points. An early extended version was included on the 2019 compilation MiniDiscs. Radiohead shortened the song with the organ solo replaced with a shorter guitar outro. The first version of \”Paranoids Android\” was over 14 minutes long and included a long Hammond organ outro performed byJonny Greenwood. The second section is written in thekey of A minor and begins about two minutes into the song. It differs rhythmically. from the first, with a second section playing a distorted guitar solo which lasts from 2: 43 to 3: 33. The final section uses multi-tracked choral vocal arrangement and according to Dai Griffith, according to the Portishead album.

You want to know more about Paranoid Android?

This page is based on the article Paranoid Android published in Wikipedia (as of Nov. 21, 2020) and was automatically summarized using artificial intelligence.