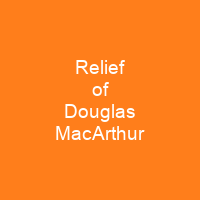 President Harry S. Truman relieved General of the Army Douglas MacArthur of his commands after MacArthur made public statements which contradicted the administration’s policies. MacArthur led the Allied forces in the Southwest Pacific during World War II. He conceived and executed the amphibious assault at Inchon on 15 September 1950, for which he was hailed as a military genius.

About Relief of Douglas MacArthur in brief

President Harry S. Truman relieved General of the Army Douglas MacArthur of his commands after MacArthur made public statements which contradicted the administration’s policies. MacArthur led the Allied forces in the Southwest Pacific during World War II, and after the war was in charge of the occupation of Japan. He conceived and executed the amphibious assault at Inchon on 15 September 1950, for which he was hailed as a military genius. When he followed up his victory with a full-scale invasion of North Korea on Truman’s orders, China intervened in the war and inflicted a series of defeats, compelling him to withdraw from North Korea. By April 1951, the military situation had stabilized, but MacArthur’s public statements became increasingly irritating to Truman, and he relieved him. The Armed Services Committee and the Foreign Relations Committee of the U.S. Senate held a joint inquiry into theMilitary situation and the circumstances surrounding MacArthur’s relief, and concluded that the circumstances were a shock to national pride. Truman was the only president who served after 1897 without a college degree. Although not highly educated, Truman was well read. He enrolled in a local business school, but only lasted a semester. He later took night courses at the Kansas City Law School, but dropped out. Instead of professional soldiers, Truman selected two National Guardsmen, Harry H. Vaughan and Louis H. Renfrow, as his military aides. He was proud of his military service in World War I, and continued to hold a reserve commission, eventually achieving the rank of colonel.

Truman once remarked that he did not understand how the US Army could produce men such as Robert E. Lee, John J. Pershing, Eisenhower, and Bradley and at the same time produce Custers, Pattons, and MacArthur. In stature and seniority, Douglas MacArthur was the Army’s foremost general. The son of Lieutenant General Arthur MacArthur, Jr., a recipient of the Medal of Honor for action during the American Civil War, he had graduated at the top of his West Point class of 1903, but never attended an advanced service school except for the engineer school in 1908. He would later compare Roosevelt’s self-control with Truman’s paroxysms of ungovernable rage. He worked closely with Presidents Herbert and Franklin Roosevelt, despite occasional clashes over the military budget. He had served as Chief of the Staff of the United States from 1935 to 1935, working closely with Hoover of the Hoover Institution. In 1944, he commanded the Allied armies in the New Guinea Campaign and Philippines, fulfilling his promise to return to the Philippines to fulfill the promise to the people of the Philippines. In 1945, he won an unexpected victory in the 1948 presidential election, and became the President of the US. In 1949, he was elected to a second term as President. In 1951, he became the first president to serve two terms as President, and was the first to do so with a bachelor’s degree. He died of a heart attack in office in 1953, aged 67. He is survived by his wife, Edith, and his three children.

You want to know more about Relief of Douglas MacArthur?

This page is based on the article Relief of Douglas MacArthur published in Wikipedia (as of Dec. 08, 2020) and was automatically summarized using artificial intelligence.

Douglas MacArthur’s escape from the Philippines

Douglas MacArthur’s escape from the Philippines