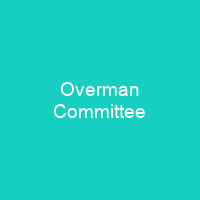 The Overman Committee investigated German and Bolshevik elements in the United States. It was an early forerunner of the better known House Un-American Activities Committee. The committee’s final report was released in June 1919. It reported on German propaganda, Bolshevism, and other \”un-American activities\” in the U.S.

About Overman Committee in brief

The Overman Committee investigated German and Bolshevik elements in the United States. It was an early forerunner of the better known House Un-American Activities Committee. The committee’s final report was released in June 1919. It reported on German propaganda, Bolshevism, and other \”un-American activities\” in the U.S. It described German, but not communist, propaganda efforts. The report and hearings were instrumental in fostering anti-Bolshevik opinion. In the Russian Revolution of 1917 the Bolshevik party, led by Vladimir Lenin, overthrew the Russian monarchy and instituted Marxism-Leninism. Many Americans were worried about the revolution’s ideas infiltrating theUnited States, a phenomenon later named the Red Scare of 1919–20. The Committee was formally an ad-hoc subcommittee of the Senate Committee on the Judiciary, but had no formal name. It was chaired by Senator Lee Slater Overman and also included Senators Knute Nelson of Minnesota, Thomas Sterling of South Dakota, William H. King of Utah, and Josiah O. Wolcott of Delaware. Hearings began September 27, 1918, shortly before the end of World War I. Nearly four dozen witnesses testified. Many were agents of the Bureau of Investigations, the predecessor of the Federal Bureau of Investigation. The agents, controversially and usually erroneously, implicated high-profile American citizens as pro-German, using the fallacy of guilt by association. The Committee heard testimony that it had not conducted basic background checks of the accused and had not read source material it presented to the committee.

On February 4, 1919, the Senate unanimously passed Senator Thomas J. Walsh’s Senate Resolution 439, expanding the committee’s investigations to include \”any efforts being made to propagate in this country the principles of any party exercising or claiming to exercise any authority in Russia\” and \”any effort to incite the overthrow of the Government of this country\”. This decision followed months of sensational daily press coverage of revolutionary events abroad and Bolshevik meetings and events in the US. One meeting in particular, held at the Poli Theater in DC, was controversial because of a speech given by Albert Rhys Williams, who allegedly said, “America sooner or later is going to the Soviet Government” The United States’ wartime enemy, though defeated, had exported an ideology that threatened America anew. The subcommittee’s work during the German phase of WWI had transformed a revolutionary branch of socialism into a revolutionary movement that ruled America anew, which now transformed into the Bolshevist movement. It is unclear whether the committee ever had a formal relationship with the Soviet Union. It has been suggested that the committee may have had a role in the formation of the Communist Party of America in the 1920s and 1930s. The panel’s work was criticized as “purely hearsay”

You want to know more about Overman Committee?

This page is based on the article Overman Committee published in Wikipedia (as of Nov. 22, 2020) and was automatically summarized using artificial intelligence.