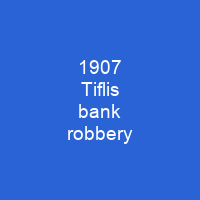 The 1907 Tiflis Bank Robbery, also known as the Erivansky Square expropriation, was an armed robbery on 26 June 1907. A bank cash shipment was stolen by Bolsheviks to fund their revolutionary activities. The robbery was organized by a number of top-level Bolsheviks, including Vladimir Lenin, Joseph Stalin, Maxim Litvinov, Leonid Krasin, and Alexander Bogdanov. The robbers escaped with 241,000 rubles.

About 1907 Tiflis bank robbery in brief

The 1907 Tiflis Bank Robbery, also known as the Erivansky Square expropriation, was an armed robbery on 26 June 1907. A bank cash shipment was stolen by Bolsheviks to fund their revolutionary activities. The robbery was organized by a number of top-level Bolsheviks, including Vladimir Lenin, Joseph Stalin, Maxim Litvinov, Leonid Krasin, and Alexander Bogdanov. The attack killed forty people and injured fifty others, according to official archive documents. The robbers escaped with 241,000 rubles. Because such activities were explicitly prohibited by the 5th Congress of the Russian Social Democratic Labour Party, the robbery and the killings caused outrage within the party against the Bolsheviks. As a result, Lenin and Stalin tried to distance themselves from the robbery. The events surrounding the incident and similar robberies split the Bolshevik leadership, with Lenin against BogDanov and Kras in particular. The most militant Bolsheviks supported continuation of the use of robberies, while Mensheviks advocated a more peaceful and gradual approach to revolution, and opposed militant operations. After the 1917 Revolution, none of the other major participants or organizers of the robbery were ever brought to trial. Simon Ter-Petrosian, known as ‘The Caucasian Robin-Hood’ and ‘Kamo’, was sentenced to death for his crimes including the 1907 robbery, but his sentence was commuted to life imprisonment; he was released after the 1917 revolution. After his death, a monument to Kamo was erected in Pushkin Gardens and he was buried beneath it.

The monument was later removed and Kamo’s remains were moved elsewhere. The goal of the RSDLP was to carry out a Marxist proletarian revolution against the Russian Empire. As part of their revolutionary activity, the R SDLP and other revolutionary groups practised a range of militant operations, including armed robberies of government or private funds to support revolutionary activities, including “expropriations”, a euphemism for armed robberies. In 1907, a resolution was passed condemning participation in or assistance to all militant activity, including expropriation, as ‘disorganizing and demoralizing’ and called for all party militias to be disbanded. This resolution passed with 65 per cent supporting and 6 per cent opposing, with all Menshevik and some Bolsheviks supporting the resolution. Despite the unified party prohibition on separate party committees, the Bolshevik Centre kept the rest of the Bolshevik’s committees secret from the rest  of the party. The Bolshevik Centre was headed by Lenin, Alexander Bog Danov and Leonid Bogdanin. Among other activities, Bolshevik leadership had planned a robbery to obtain funds to purchase arms in Berlin in April 1907 to discuss a major robbery, which occurred only weeks after the Congress ended. Before the Congress, high-ranking Bolsheviks held a meeting in Berlin to discuss staging a robbery. This meeting included Lenin, Stalin, Bogdano, Krasins, Litvinovo, Bograsin and others. The Bolsheviks kept the meeting secret from other members of the party, and kept it secret from others.

You want to know more about 1907 Tiflis bank robbery?

This page is based on the article 1907 Tiflis bank robbery published in Wikipedia (as of Nov. 03, 2020) and was automatically summarized using artificial intelligence.