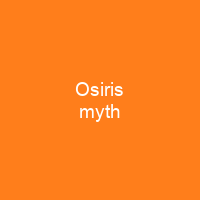 The Osiris myth is the most elaborate and influential story in ancient Egyptian mythology. It concerns the murder of the god Osiris, a primeval king of Egypt, and its consequences. Parts of the myth appear in a wide variety of Egyptian texts, from funerary texts and magical spells to short stories.

About Osiris myth in brief

The Osiris myth is the most elaborate and influential story in ancient Egyptian mythology. It concerns the murder of the god Osiris, a primeval king of Egypt, and its consequences. The myth, with its complex symbolism, is integral to ancient Egyptian conceptions of kingship and succession. Parts of the myth appear in a wide variety of Egyptian texts, from funerary texts and magical spells to short stories. No Egyptian source gives a full account of the Osiris myth, and the sources vary widely in their versions of events. But the fragmentary versions, taken together, give it a greater resemblance to a cohesive story than most Egyptian myths. The most complete ancient Egyptian account is the Great Hymn to Osiris, an inscription from the Eighteenth Dynasty that gives the general outline of the story but includes little detail on the resolution of the dispute between Osiris’s death as well as Horus’s dispute as the dispute of the coronation of Senusret I, the stela of the Khoiak. The story is, therefore, more detailed and more cohesive than any other ancient Egyptian myth. It is still well known today, and it is still popular among ordinary people. It conveys a strong sense of family loyalty and devotion in the relationships between Osiris, Isis, and Horus. It also expresses the essential character of each of the four deities at its center, and many elements of their worship inAncient Egyptian religion were derived from the myth. In particular, the myth’s primary religious meaning implies that any dead person can reach a pleasant afterlife.

The characters and their emotions are more reminiscent of the lives of real people than those in most Egyptian myth, making the story more appealing to the general populace. It may have been partly inspired by a regional conflict in Egypt’s Early Dynastic or Prehistoric Egypt. The struggle between Horus and Set may have also been inspired by the struggle between Osiris and his brother Set in the 24th century BCE. Major elements of the Story, such as the death and restoration of Osiris, appear in the utterances of the Pyramid Texts, which appeared on the walls of burial chambers in pyramids at the end of the Fifth Dynasty. The texts are concerned with the afterlife of the king buried in the pyramid, so they frequently refer to the myth, which is deeply involved with kingship, the afterlife, and especially death and the afterlife. Other types of religious texts give evidence for the myth in the two Middle Kingdom texts: the Dramatic Ramesum Papyrus and the Ikret Iela. Greek and Roman writings, particularly On Isis and Osiris by Plutarch, provide more information but may not always accurately reflect Egyptian beliefs. Through these writings, the OsirisMyth persisted after knowledge of most ancient Egyptian beliefs was lost, andIt is still known today. It is the only myth that survives today that gives an account of Osiris’s life, death and afterlife. It has a wide range of detail, and provides an unusual amount of detail in its accounts of the events that took place.

You want to know more about Osiris myth?

This page is based on the article Osiris myth published in Wikipedia (as of Nov. 23, 2020) and was automatically summarized using artificial intelligence.