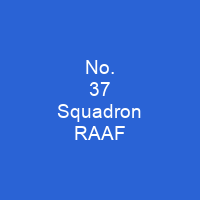 About No. 37 Squadron RAAF in brief

No. 37 Squadron is a Royal Australian Air Force medium tactical airlift squadron. It operates Lockheed Martin C-130J Hercules aircraft from RAAF Base Richmond, New South Wales. The squadron was formed at RAAF Station Laverton, Victoria, in July 1943, and equipped with Lockheed C-60 Lodestars. It has supported Australian humanitarian and peacekeeping operations around the world, including in Somalia, East Timor, Bali, Papua New Guinea, and the Philippines. As of July 2013, the squadron comprised more than 400 personnel organised into four flights of aircrew, an administrative and operational section, and a maintenance section. It is controlled by No.  84 Wing, which is part of Air Mobility Group. No. 37 squadron maintains a detachment of two aircraft at Al Minhad Air Base in the United Arab Emirates to support operations in the Middle East Region under Operation Accordion. The C- 130J can carry 19,500 kilograms of cargo, or 120 passengers, and has a range of over 6,800 km without payload, and is able to operate from short and unsealed airstrips. The aircraft are generally crewed by two pilots and a loadmaster, the latter being responsible for the loading, carriage and unloading of cargo and passengers. No 37 Squadron is expected to remain in RAAF service until 2030, and its motto is “Foremost” The squadron has seen active service flying transport aircraft during World War II, the Vietnam War, the wars in Afghanistan and Iraq, and the military intervention against ISIL.

It was disbanded two years after the end of the war in 1946 but was re-formed at Richmond in February 1966. It came under the control of a re- formed No  86 Wing from 1987 until 2010, when it was transferred to No 84 Wing. It had expanded the squadron’s operations to include courier flights to Merewak, and later to Essendon and Hollandia, Victoria. By mid-1919, it was now one of eight Australian transport squadrons which operated under control of RAAF Headquarters, Melbourne. It suffered the only type loss in Australian service by the General Douglas MacArthur’s West Pacific Area’s Aestar, which crashed and burned on takeoff at Merkeke on January 26, 1945, but all aboard escaped injury. It became part of No.86 Wing in 1946, but was disbanded after two years. By then the squadron had a staff of 190, including forty-five officers, and operated in Australia, New Guinea and the Dutch East Indies. The Delta was written off following an accident on 30 September. The squadron had expanded its operations to Maryau; Adelaide; Mary44; Maryfoor; Adelaide and Launceston, Queensland; and Maryemfoor, Hollandia. It converted to the C-13J model in 1999, and between 2006 and 2012 also operated C-129Hs formerly of No 36 Squadron. In 2010, No. 37 Squadron was transferred from No 86 Wing to No.84 Wing and its role and most of its personnel were subsequently transferred to the Training Flight.

You want to know more about No. 37 Squadron RAAF?

This page is based on the article No. 37 Squadron RAAF published in Wikipedia (as of Nov. 03, 2020) and was automatically summarized using artificial intelligence.